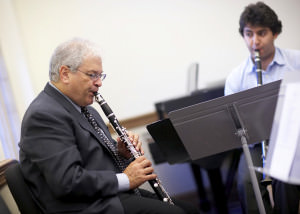 The Yale School of Music will present a Clarinet Kaleidoscope Concert on Thursday, May 5, 2011 at 5 pm in Sudler Recital Hall in W.L. Harkness Hall (100 Wall St., adjacent to Sprague Hall). The concert is the brainchild of David Shifrin, who is a clarinet professor at the School of Music as well as the artistic director of both the Chamber Music Society at Yale and the Yale in New York concert series. Shifrin will perform alongside four of his graduate students in clarinet: Soojin Huh ’11MM, Emil Khudyev ’11MM, Wai Lau ’12MM, and Sara Wollmacher ’11MM. Guest artists include Vincent Oneppo ’73MM, recently retired from the staff of the School of Music, and Paul Cho ’09MM, ’10AD.

The concert will feature the clarinet septet Lobgesang by faculty composer Joan Panetti. The work is dedicated to Keith Wilson, who preceded David Shifrin on the Yale School of Music clarinet faculty. Another highlight will be Mozart’s Adagio in B-flat major for two clarinets and three basset horns. There will be duos by Poulenc and Andrzej Anweiler and quintets by Mozart, Dvorák, and Strauss. The program will also feature numerous arrangements of works such as Joplin rags, Piazzola tangos, Gershwin’s “Summertime” and “Somebody Loves Me,” Rimsky-Korsakov’s “Flight of the Bumble Bee,” and more.

Admission to the performance is free. For more information, visit the Yale School of Music's website or call the concert office at 203 432-4158.

Winner of the 2000 Avery Fisher Prize, clarinetist David Shifrin has appeared with the Philadelphia and Minnesota orchestras and the Dallas, Seattle, Houston, Milwaukee, Detroit, and Denver symphonies. He has appeared in recital at Alice Tully Hall, Weill Recital Hall at Carnegie Hall, and the 92nd Street Y in New York City, and at the Library of Congress in Washington, D.C. In addition he has appeared in recital and as soloist with orchestra throughout Europe and Asia. A three-time Grammy nominee, he has been the artistic director of Chamber Music Northwest since 1980. In 1987 he joined the faculty at Yale, where he is a professor of clarinet and chamber music as well as the artistic director of the Chamber Music Society at Yale and the Yale in New York concert series. An artist member of the Chamber Music Society of Lincoln Center since 1989, he served as its artistic director from 1992 to 2004.