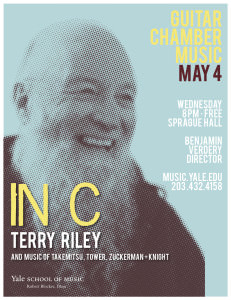 The Yale School of Music will present a Guitar Chamber Music concert on Wednesday, May 4, 2011 at 8 pm in Morse Recital Hall in Sprague Hall (470 College St., New Haven). The concert will feature a performance of Terry Riley’s mesmerizing 1964 work In C with musicians from across the School of Music, including bassist Jack Vees and oboist Libby van Cleve.

In addition, the concert will include Toru Takemitsu’s Toward the Sea for alto flute and guitar, Joan Tower's Snow Dreams for flute and guitar, and Bartók's Five Romanian Folk Dances for violin and guitar. The program will also present a new piece co-composed by Max Zuckerman and Adrian Knight, both graduate students at the Yale School of Music.

In C is flexible in both instrumentation and duration, as well as in the specifics of how its 53 individual phrases overlap and unfold as each musician moves through them. The piece is widely considered the beginning of musical minimalism.

Toward the Sea, said Takemitsu, is “an homage to the sea” in which “meditation and water are wedded together.” Much of it is rhythmically free, without barlines. Greenpeace commissioned the piece in 1981 for its Save the Whales campaign. The titles of its three sections (The Night, Moby-Dick, and Cape Cod) refer to Melville’s Moby Dick. In speaking of Snow Dreams, Joan Tower has said: "There are many different images of snow.... Many of these images can be found in the piece, if in fact, they need to be found at all."

Benjamin Verdery is the director of the guitar program at the Yale School of Music and is the coordinator of this concert.

Admission to the performance is free. For more information, visit the Yale School of Music's website or call the concert office at 203 432-4158.