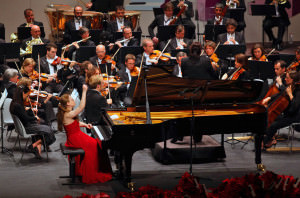 Marianna Prjevalskaya ’10AD has won the first prize at the 53rd Jaén International Piano Competition in Spain. The final round took place May 6, 2011 at the new Infanta Leonor Theatre of Jaén, with the City of Granada Orchestra directed by Stamatia Karampini. The jury, headed by the Spanish concert pianist Begoña Uriarte, included musicians from five different countries. Prjevalskaya performed Chopin's Piano Concerto No. 1 in E minor, Op. 11. The first prize winner receives 20,000 euros, a diploma and gold medal, the recording of a CD with Naxos, and a six-concert tour of Spain and the United States. Prjevalskaya, born in Moldavia in 1982, has been a resident of La Coruña since 1992; she is the thirteenth person from Spain to win the competition.

Tatiana Dorokhova, from Russia, won the second prize, while the third prize was awarded to the Italian Viviana Pia Lasaracina. The three winners received their awards in a ceremony at the new Infanta Leonor Theater. The 53rd edition of this competition boasted 46 pianists from 20 different countries. The contest is considered one of the most prestigious in Spain.