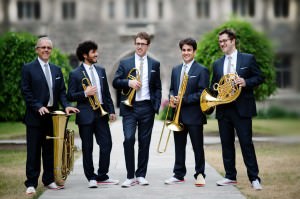 Canadian Brass announced earlier this month that trombonist Achilles Liarmakopoulos is joining the prestigious ensemble. Achilles, a native of Greece, is an established and award-winning trombone soloist dedicated to performing new pieces and important works revived from the archives as well as standard repertoire. He has premiered many pieces from emerging composers who have written specifically for him. Achilles has given solo recitals in the U.S.A, China, Spain, France, the Netherlands, Austria, Finland and Greece and has performed as a member of many leading orchestras worldwide.

Tubist Chuck Daellenbach remarked, “We are thrilled to have Achilles join us. He is young, charismatic and one of the finest trombonists performing today. We all love his presence, focus and personality and think he will be an ideal team member of our ensemble.”

Achilles is a graduate of Yale University, The Curtis Institute of Music, the San Francisco Conservatory and the Philippos Nakas Conservatory. He was recently appointed principal trombone of the Greek Radio Symphony – ERT. Just this year Achilles saw the release of his solo project featuring Piazzolla compositions on the Naxos label.

Achilles says this about joining the Brass, “There are no words to express how excited and honored I feel to be part of this legendary and phenomenal group.” For his first appearance with the ensemble, Achilles will return from Greece in June to join us in a soon-to-be-announced performance.