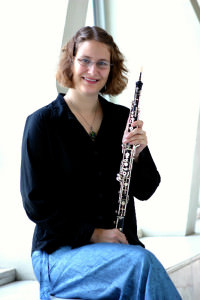 Keri E. McCarthy ’00MM, Assistant Professor of Oboe and Music History at Washington State University, has been awarded a Fulbright Scholar grant to lecture and research at Chulalongkorn University in Bangkok, Thailand during the 2011-2012 academic year. The grant was announced by the United States Department of State and the J. William Fulbright Foreign Scholarship Board.

McCarthy will study relationships between Thai traditional and art musics. Her project includes commissioning three new pieces for oboe duo from Thai composers Weerachat Premananda, AnoThai Nitibhon, and Siraseth Pantura-Umporn. Keri will perform the works in concert this summer with oboists from Thailand, Malaysia, and the Philippines. She will also teach oboe and American music history at Chulalongkorn University, one of the oldest and most prestigious universities in Thailand.

This Fulbright continues McCarthy’s research into musics of Southeast Asia. In 2008 she received a WSU New Faculty Seed Grant, which funded commissions for new works from four prominent Southeast-Asian composers, and performances of those works and masterclasses in Bangkok (Thailand), Hanoi (Vietnam), Kuala Lumpur (Malaysia), and Singapore.