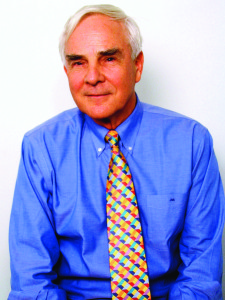 Education journalist John Merrow will give the keynote speech at the Symposium on Music in Schools, which will take place June 9–12 at the School of Music. Merrow is the education correspondent for PBS NewsHour and the president of Learning Matters, an independent production company based in New York City. His most recent book, The Influence of Teachers, was published in February by LM Books. He blogs regularly at Taking Note.

Merrow's talk, titled Is Harmony in Education Possible?, will be a part of the Symposium's Awards Dinner on Friday, June 10. The dinner will feature the presentation of the Yale Distinguished Music Educator Award to fifty music teachers from across the country.

The biennial Symposium brings together fifty music educators from public schools in the United States who are nominated by their superintendents and selected by a panel of music professionals. In addition to receiving the Yale Distinguished Music Educator Award, these teachers will travel to New Haven, all expenses paid, to attend the 2011 Symposium on Music in Schools. They will be joined at the Symposium by the music teachers in the New Haven Public Schools.

"I am thrilled to be invited," Merrow said."I don’t think there’s any place quite like the Yale School of Music" in terms of university involvement in the public schools in its community. The mission "to honor teachers – that’s just absolutely wonderful thing that you do." The Symposium is one branch of the Music in Schools Initiative at the School of Music, funded by the Yale College Class of 1957 as its 50th reunion class project.

One of Merrow's concerns with today's educational landscape is the incoherence of approaches to deep-seated, system-wide problems. In a recent blog post, he wrote:

Here [in the U.S.] schools of education accept a high percentage of applicants, the training is not demanding, we pay poor starting salaries and provide little assistance to beginning teachers, and the best teachers invariably migrate to the richer districts... Our curricula are out of sync and often incoherent, and we tend to spend more on the richest kids, not the neediest ones. Because we (perhaps appropriately) do not trust the poorly trained and under-qualified teachers we’ve hired, we spend money on ‘teacher-proof’ curricula and evaluate students using test scores and more test scores.

A “willingness to abandon the arts,” he says, provides further evidence of incoherence. The distinguished music educators who will be attending the Symposium, he understands, share his concern. "They know how important what they do is."

Merrow's search for "harmony" in public education is a search for coherence. That in itself is a lofty goal, he acknowledges, one that includes higher standards and more challenging teacher training.

In his recent commencement address at the University of Michigan's School of Education (read excerpts here), Merrow said to the graduates:

You know the power of technology, and you will use its power to create learning opportunities. You won’t let schools remain ‘answer factories’ but will help your students formulate questions, help them dig deeper and deeper. You will fan the flames of their curiosity, instead of trying to make students fit into neat boxes.

But you have to stick together. Be an army. Elevate the profession.

The Distinguished Music Educators were selected for the qualities that Merrow articulates: encouraging curiosity and creativity, helping students dig deeper. By bringing together these educators to examine topics like distance learning technology and the role of music in the general classroom, the Symposium helps build the army that Merrow seeks. It builds the music teaching profession into a broader network with deeper resources.

"The Yale School of Music deserves all kinds of praise," Merrow says, for its Music in Schools programs. Thinking further, he surmised, "Maybe there’s a way to challenge some other universities to do the same thing, with art teachers [for example]..."

Merrow began his career as an education reporter with NPR in 1974 with the series Options in Education, for which he received the George Polk Award in 1982. Since 1984 he has worked in public television as a NewsHour correspondent and as host of a documentary series, The Merrow Report. His work has been recognized with Peabody Awards in 2000 and 2006, Emmy nominations in 1984, 2005, and 2007, four CINE Golden Eagles, and other reporting awards. A frequent contributor to USA Today, New York Times, Washington Post, Los Angeles Times, and Education Week, he is the author of Choosing Excellence (2001) and Below C Level (2010), as well as co-editor of Declining by Degrees (2005). His newest book, The Influence of Teachers (2011), is now available. Merrow earned a B.A. from Dartmouth College, an M.A. in American Studies from Indiana University, and a doctorate in Education and Social Policy from the Harvard Graduate School of Education. He received the James L. Fisher Award for Distinguished Service to Education from the Council for the Advancement and Support of Education in 2000 and the HGSE Alumni Council Award for Outstanding Contributions to Education in 2006. He serves on the Board of Trustees of Teachers College, Columbia University.