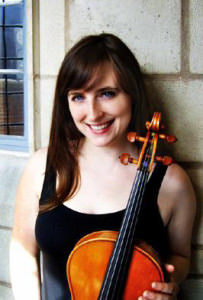 Violist Kendra James ’12MM won the first prize in the Shean Strings Competition in Edmonton. In addition to an award of $8,000, she wins the opportunity to perform as a soloist with the Edmonton Symphony Orchestra.

She has previously soloed with the Brentwood-Westwood Symphony and the Vancouver Youth Symphony Orchestra. Her performance with the Edmonton Symphony will be her solo debut with a professional Canadian orchestra.

James was among the six finalists selected to compete in the event, which took place May 18 through 20 at Alberta College.

"It was such a surprise and honour to place first at the Shean Competition, knowing how many remarkable musicians were competing from across Canada," she told the Delta Optimist.

A native of Vancouver, Canada, Eleanor Kendra James began the violin at age four and changed to the viola at fourteen. Kendra was a prizewinner in the Atlantic Symphony Concerto Competition and the Eastern Connecticut Symphony Orchestra Instrumental Competition in 2011. As the grand prizewinner of the 2010 Brentwood-Westwood Symphony Artists of Tomorrow Competition, Kendra was awarded the Howard Engelman Scholarship. Kendra also received a BC Arts Council Scholarship in 2010.

An avid chamber musician, Kendra has collaborated with performers such as Ani Kavafian, Ron Leonard, Paul Neubauer, and Paul Coletti, and has been coached by Michael Tree, Pinchas Zukerman, Clive Greensmith, and Martin Beaver. Kendra will be a featured artist in the Atlantic Symphony Orchestra’s 2011-12 chamber music season.

Kendra has participated in prestigious summer festivals throughout Canada and in China including Morningside Music Bridge and Zukerman’s Young Artists Programme. This summer she will attend the Sarasota Music Festival and the Norfolk Chamber Music Festival. Kendra has studied at the Vancouver Academy of Music with Gerald Stanick and holds a Bachelor of Music degree from the Colburn School, where she studied with Paul Coletti. She is currently pursuing her Master of Music degree at the Yale School of Music, where she is a student of Ettore Causa.