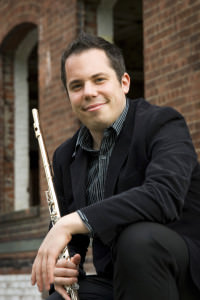 Conor Nelson ’05MM has been appointed Assistant Professor of Flute in the College of Musical Arts at Bowling Green State University commencing Fall, 2011.

As a chamber musician, he performs regularly with marimbist/percussionist Ayano Kataoka as part of the Conor and Ayano Duo.  Involved in several exciting commissioning projects for their genre, the duo has performed in Merkin Concert Hall, CAMI Hall, Tokyo Bunka Kaikan, Izumi Hall, and as guest artists for the Ottawa Flute Association in Canada.  A recent recital at the Tokyo Opera City Hall was broadcast nationally in Japan on NHK television, and the duo recently released a CD on New Focus Recordings.

With the Intrada Winds he was a prizewinner at the Fischoff, Coleman and Yellow Springs national chamber music competitions and performed at several prestigious concert venues throughout the United States. He is a regular guest at the Chamber Music Quad Cities series and has appeared at the OK Mozart, Yellow Barn, Look and Listen (NYC), Norfolk, Chesapeake, Aspen, Banff, and Okemo Mountain festivals.

He received degrees from the Manhattan School of Music, Yale University, and Stony Brook University, and he was the winner of the school-wide concerto competitions at all three institutions.  He is also a recipient of the Thomas Nyfenger Prize, the Samuel Baron Prize, and the Presser Award.  His principal teachers include Carol Wincenc, Ransom Wilson, Linda Chesis, and Susan Hoeppner.