This is a guest post by Michael Compitello '11MMA, a member of the Yale Percussion Group 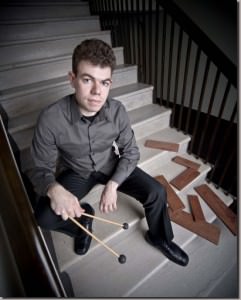 Unlike most instrumentalists, percussionists are rarely able to get a new piece of music and immediately begin practicing. Outside of marimba solos, we must usually go through a kind of hunting and gathering, finding the required instruments and mallets and positioning them into a newly constructed altar devoted to this new piece. Only then may we begin to explore.

At the same time, a composer’s specificity about which instruments and mallets to use could mean that the same piece could sounds light-years apart in the hands of different percussionists. While some composers are almost stiflingly specific about instruments (“a 12-inch tom-tom tuned to a B-flat that rings for approximately 3 seconds when struck with a 6mm knitting needle” and so on), others are very general, asking for “a tom tom” or “woodblock.”

David [Lang]’s music lies is somewhere in-between these two, asking us to take care with some of the parameters, but to use our intuition with others: in the second movement of the so-called laws, each player needs seven specific pitches of pipe, but in the third movement, any 9 “small and fragile sounding” teacups will work.

In the so-called laws, we’re also required to build some of the instruments we play and to find some fairly unorthodox sounds. We made 28 wooden planks for the first movement and 28 tuned metal pipes for the second, while scouring the flower pot section of Home Depot and the teacup aisle at Ikea, tuner at the ready.

David explained that he did this so that every performance of the piece is different and less boring, but it’s also a way for us to accentuate or highlight interpretive decisions we’ve made through the instruments we select and build. 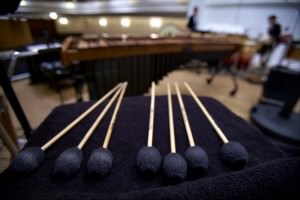 Throughout the first movement, we play frequently in unison or close to it. However, despite the synchronicity of our gestures, each players’ own pitches of wood mean that we are never actually together in pitch except for the top three woodblocks. Here, it feels like David is riffing on the cognitive dissonance between the visual and sonic experience: we look the same, but sound different.

Because of this, we decided to go for broke, making the differentiation between the four players’ lowest notes as extreme as possible. That means that player four will have a huge range between the highest and lowest of his four lowest bars while player 1 has as narrow a range as possible.

Taking a road trip to the nearest exotic wood store, we bought Purpleheart and Ipe, two resonant woods that we thought would ring enough to project without using extremely harsh mallets.

After some basic math, we cut the planks to various sizes and distributed them among the four of us, mounting them to large boards with weather-stripping — indispensable for a percussionist — under their nodal points to ensure maximum resonance. Later, we fine-tuned the top three boards.

The process was similar for the second movement: finding a type of metal pipe with a clear and resonant pitch, cutting them to the required pitches and fine tuning.