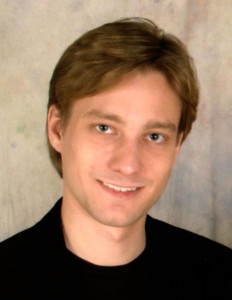 The Yale School of Music is pleased to announce that composer Garth Neustadter ’12MM has been nominated for a Primetime Emmy Award for his score for the PBS documentary John Muir in the New World. The score was recorded at Yale with members of the Yale Philharmonia, the Yale Symphony Orchestra, and the Linden String Quartet. Neustadter is a student in the School of Music’s composition program, where he studies with Christopher Theofanidis.

Garth Neustadter is an Emmy Award-nominated composer and multi-instrumentalist currently pursuing graduate studies in composition at the Yale School of Music. His work has appeared in feature-length productions by PBS, Turner Classic Movies, and Warner Bros. The Baltimore Sun says of his music, “The guy’s a natural, as his soaring theme makes plain.” Garth gained international attention in 2007 when he won first prize in the Turner Classic Movies Young Film Composers Competition. He was subsequently commissioned by Turner Classic Movies and Warner Brothers to compose and produce the feature-length musical score for the film The White Sister, which premiered on the TCM channel. Most recently, he scored the PBS documentary John Muir in the New World, for which he received a Primetime Emmy nomination.

Garth is a five-time DownBeat Magazine award winner in the areas of composition, classical violin performance, and jazz saxophone performance. His achievements have been profiled in USA Today, the Baltimore Sun, Film Music Magazine, The Chronicle of Higher Education, DownBeat, and the National Federation of Music Clubs Review. He has received an ASCAP Morton Gould Award, an ASCAP Young Jazz Composers Award, and an ASCAP fellowship for film scoring at Aspen, as well as multiple awards from the National Federation of Music Clubs. He was recently selected as one of ten finalists in the International Transatlantyk Film Music Competition. Garth holds degrees in violin and voice performance from the Lawrence Conservatory of Music.