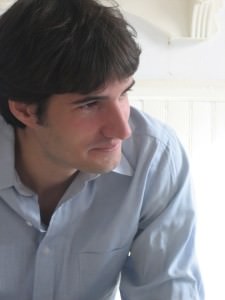 Cooper was selected from a pool of 134 highly-qualified applicants from around the world. The selection panel included the four members of the Calder Quartet and Festival director Matt McBane. The aesthetic of many of Cooper’s compositions comes from his interest in recreating the sound of digitally slowed down music for live ensembles. The result is slow-motion music that the panel found to be unique and emotionally powerful.

As the winner of the competition, Jacob Cooper won a $3,000 co-commission from the Festival and ArtPower@UCSD to write a major new piece for the Calder Quartet. It will be premiered at the 2011 Festival and performed again at The Loft at UCSD on January 27, 2012.

Jacob Cooper commented: "I'm delighted to be the commissioned composer for this year's festival. I had the opportunity to see the Calders play Christopher Rouse's new quartet at Zankel Hall recently, and they totally nailed the harrowingly difficult piece. Many of my recent works have included amplification and live processing (through a laptop), and I expect that my Carlsbad piece will continue in this vein. Whatever notes end up on the page, I know they will be in good hands."

Andrew Bulbrook, violinist of the Calder Quartet, said, "It is always an honor and a privilege to go through the judging process for the Carlsbad Music Festival competition. This year saw a record number of highly qualified applicants from around the world, and there were many incredible composers we could not select whose music we hope to play in the future. Jacob Cooper's work leaped out at us from this incredible pool of talent. His work was both intellectual and emotional, and he carried those qualities through both standard instrumentation as well as a variety of incorporations of various media and technology. We felt he was a unique and creative voice, an artist as well as a composer, and we are thrilled to have the opportunity to work with him."

The Carlsbad Music Festival Composers Competition has been held each year since 2005 to commission a new work for the Calder Quartet from a composer under 35. It is a central part of both the Festival’s and the Quartet’s mission to promote the music of today’s most exciting and interesting young composers. Including the Competition winners, to date the Festival has commissioned 12 works for the Quartet.

For more information about the Festival, including samples of Jacob Cooper’s work, please visit the website.

Jacob Cooper's diverse compositions have earned him a Charles Ives Scholarship from the American Academy of Arts and Letters, a Morton Gould Award from ASCAP, and a CAP grant from the American Music Center. He has held residences at the Banff Centre for the Arts and twice at the Atlantic Center for the Arts--as a composer and most recently as a sound/video artist--and this winter he will be in residence at the Kimmel Harding Nelson Center for the Arts. He has also attended the Bang on a Can Summer Institute and the Minnesota Orchestra Composer Institute. Jacob is a graduate of the Yale School of Music.

Jacob’s music has been performed by several ensembles across the continent, including the JACK Quartet (New York), Bent Frequency (Atlanta), the New Music Collective (Charleston),  Ensemble Symposium (Vancouver), the NOW Ensemble (New York), the Y Trio (New York), the Juventas Ensemble (Boston), the Boston Modern Orchestra Project, and the Minnesota Orchestra. His work has appeared at the Wordless Music concert series at the Miller Theater in New York, at the International Festival of Arts and Ideas in New Haven, at the Harold Golen Gallery in Miami, and on the popular videoblog Rocketboom.

In 2009, Jacob provided musical direction for Immediate Medium’s Chuck Chuck Chuck at the Collapsable Hole in Brooklyn. Timberbrit, Jacob’s opera about a fictional reunion between Britney Spears and Justin Timberlake, has been featured on NPR’s All Things Considered and ran this November at the Incubator Arts Project. Jacob has also recently experimented with visual media, and this past September his video Commencer Une Autre Mort was shortlisted for the YouTube / Guggenheim Biennial.