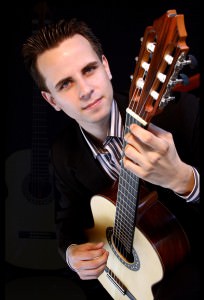 Ruiz was selected and invited by the organizers to take part in a two-week course entitled "Sinfonismo y Música actual" (Symphonism and Actual Music) with composer Anton Garcia Abril and orchestral conductor Maximino Zumalave. Students focused on Spanish repertoire for the orchestra and on writing their own orchestral pieces.

Hermelindo Ruiz was announced as the winner of the annual Andrés Segovia–José Miguel Ruiz Morales Prize during the final convocation of the course. Ruiz said the prize is particular important to him as it "exemplifies the relevance on the dual career that I  currently pursue as both a guitarist and composer."

Hermelindo Ruiz, a 23-year-old guitarist and composer from Puerto Rico, is the youngest recipient in history to receive the Angel Mislán Prize for promoting excellence in Puerto Rican music and culture. He has also been awarded the Governor's Medal and numerous other prizes. His compositions for the classical guitar have been performed in Spain, Slovenia, Portugal, Mexico, Guatemala, and the United States.