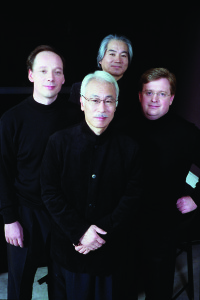 One of the world’s foremost chamber ensembles, the Tokyo String Quartet is celebrating its thirty-fifth year in residence at the Yale School of Music. The New York Times has praised the quartet for nothing less than “exemplary chamber music,” and the Toronto Star has called it “an established ensemble playing as one living, breathing organism.”

"Inspirare," by Canadian composer Jeffrey Ryan, was commissioned by Music Toronto for the Tokyo String Quartet. The title is Latin for “to breathe into.” As Ryan writes: “It is breath that has inspired this single-movement work for string quartet. The three major ensemble sections are framed by four extended solos, each with a different character and rooted in the pitch of a different open string. The spotlight is shone in turn on each member of the quartet, while the ensemble sections bring all four together in varied combinations.”

This concert series, formerly known as the Chamber Music Society at Yale, has been freshly renamed the Oneppo Chamber Music Series. The new name honors Vincent Oneppo, who served Yale throughout his rich career after graduating from the School of Music. Many people, noted Dean Robert Blocker, “are familiar with his vital role in directing the chamber music series over the years and in bringing many of the world’s finest performers to New Haven. Upon his retirement last fall, it seemed fitting to honor both him and the series in this manner.”

Tickets to this concert of the season are $25–$35, $15 with student ID. Subscriptions to the full series are available, and Pick 5 and Pick 3 sampler packages offer discounts up to 20% off regular ticket prices. For more information or to purchase tickets, visit music.yale.edu or call the concert office at 203 432-4158.

The Tokyo String Quartet has captivated audiences and critics alike since it was founded forty years ago. Regarded as one of the supreme chamber ensembles of the world, the quartet – Martin Beaver and Kikuei Ikeda (violins), Kazuhide Isomura (viola) and Clive Greensmith (cello) – has collaborated with a remarkable array of artists and composers, built a comprehensive catalogue of critically acclaimed recordings, and established a distinguished teaching record.

Performing over a hundred concerts worldwide each season, the Tokyo String Quartet has a devoted following that includes the major capitals of the world and extends to all corners of the globe. Officially formed in 1969 at the Juilliard School of Music, the quartet traces its origins to the Toho School of Music in Tokyo. Soon after its formation, the quartet won First Prize at the Coleman Competition, the Munich Competition, and the Young Concert Artists International Auditions. An exclusive contract with Deutsche Grammophon firmly established it as one of the world's leading quartets, and it has since released more than 40 landmark recordings. The ensemble now records on the Harmonia Mundi label.