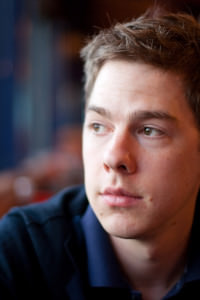 The Yale School of Music presents Aaron Hodgson, trumpet, in a Doctor of Musical Arts recital on Thursday, September 22, 2011 at 8 pm in Morse Recital Hall. Hodgson will be joined by trumpeters Tom Bergeron and Paul Murphy, who are both alumni of the Yale School of Music, and by pianist Daniel Schlosberg.

Dedicated to expanding the repertoire and audiences for trumpet, Hodgson will perform a program of music written in the past fifty years. The program opens with the Passagen-Processional, a trumpet trio written in 2010 by Moritz Eggert, and will continue with two multi-movement works: William Rowson’s recent Sonata for trumpet and piano and Robert Henderson’s Variation Movements from 1967.

The second half will begin with two pieces by younger composers: Sung in a Rickshaw by Gabriel Dharmoo (b. 1981), and Song Without Words by David J. Lang (b. 1988). The concert will conclude with another piece for three trumpets, Tobin Stokes’s Trio Lyrical from 2010.

Trumpeter Aaron Hodgson is an accomplished solo, chamber, and orchestral musician, praised for his “outstanding lyrical trumpet playing” (Hartford Courant). A prize-winner in the 2008 OSM Standard Life Competition, Aaron has been broadcast nationally as a soloist by CBC Radio’s The Signal. His orchestral performances include appearances with the New Jersey Symphony Orchestra and l’Orchestre de la Francophonie, led by conductors such as Neeme Jarvi, Sir Neville Marriner, and Helmuth Rilling. He ias principal trumpet on Naxos and Analekta recordings of Bach’s Magnificat, Berlioz’s Symphonie Fantastique, and Beethoven’s complete symphonies. Committed to expanding the trumpet’s capabilities and audiences, Aaron is a co-founder of the Reveille Trumpet Collective, which has presented engaging, multimedia performances at the Banff Centre and the Sound Symposium Festival, and contributed to the commissioning of many new solo and chamber works for trumpet. Aaron joined the faculty of Memorial University of Newfoundland in 2008.