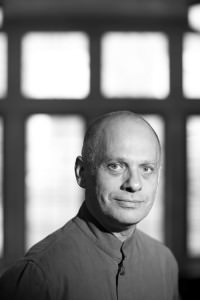 The Yale School of Music presents the first New Music New Haven concert of the year on Thursday, October 6, 2011. Pulitzer Prize-winning composer David Lang, a faculty member and graduate of the School of Music, is the featured composer. The concert will take place at 8 pm in Morse Recital Hall (located in Sprague Hall at 470 College Street).

New works by four students in the School’s prestigious composition program will open the concert. Hannah Lash’s “Hush” and Loren Loiacono’s “Walking Rhythm” are written for mixed ensembles, which will be led by the School of Music’s two conducting fellows. A string quartet called “connecticut shift” by Paul Kerekes will follow, and Garth Neustadter’s “New Haven Counterpoint” for soprano saxophone will close the first half. Neustadter recently won an Emmy Award for his score to a PBS documentary.

David Lang will be represented by two pieces. “Cheating, Lying, Stealing,” for the unusual combination of cello, bass clarinet, piano, and three percussionists, has an amusing story behind it. “During a trip to the dentist,” says Lang, “My son was given laughing gas. The dentist called it ‘sweet air,’ a gentle name to take the fear out of having a cavity filled. It worked.”

Lang’s piece “sweet air” is written for violin, cello, flute, clarinet, and piano. The composer writes: “You are not taught to find the dirty seams in music. You are not taught to be low-down, clumsy, sly and underhanded. In ‘Cheating, Lying, Stealing,’ I am trying to look at something dark.”

All the music will be performed by students and alumni of the Yale School of Music. Chris Theofanidis is the artistic director of New Music New Haven.

ABOUT  THE FEATURED COMPOSER

The music of David Lang has been performed by major musical, dance, and theatrical organizations throughout the world, including the Santa Fe Opera, New York Philharmonic, Cleveland Orchestra, Kronos Quartet, Nederlands Dans Theater, and the Royal Ballet, to name a few, and has been performed in the most renowned concert halls and festivals in the United States and Europe. Lang is well known as co-founder and co-artistic director of New York's legendary music festival Bang on a Can. In 2008, Lang was awarded the Pulitzer Prize in Music for The Little Match Girl Passion, commissioned by Carnegie Hall for Theater of Voices. He has also has been honored with the Rome Prize, a Bessie Award, a Village Voice OBIE Award, and grants from the Guggenheim Foundation, NEA, Foundation for Contemporary Performance Arts, New York Foundation for the Arts, and American Academy of Arts and Letters. His work is recorded on the Sony Classical, Teldec, BMG, Point, Chandos, Argo/Decca, Caprice, Koch, Albany, CRI, and Cantaloupe labels. David Lang holds degrees from Stanford, the University of Iowa, and the Yale School of Music. He joined the Yale faculty in 2008.