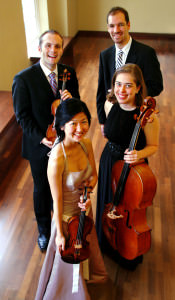 Chamber Music America (CMA) announced today that the Jasper String Quartet has been selected to receive the Cleveland Quartet Award. The Jasper Quartet was the graduate quartet-in-residence at the Yale School of Music from 2008 to 2010.

Established in 1995, the biennial Cleveland Quartet Award honors and promotes a rising young string quartet whose artistry demonstrates that it is in the process of establishing a major career. “We are delighted that the Jasper String Quartet is being recognized for its exceptional artistic achievements, and pleased that the Cleveland Quartet Award will have a role in developing this young ensemble’s future career, ” said Margaret M. Lioi, Chamber Music America’s chief executive officer.

Originally formed at Oberlin Conservatory in 2003, the Jasper Quartet (J Freivogel and Sae Chonabayashi, violinists; Sam Quintal, violist; and Rachel Henderson Freivogel, cellist) began pursuing a professional career in 2006 as Rice University’s graduate quartet-in-residence. In 2008, the quartet continued its training with the Tokyo String Quartet as the graduate quartet-in-residence at the Yale School of Music.

After winning the Grand Prize and the Audience Prize in the 2008 Plowman Chamber Music Competition, the Jasper String Quartet went on to win the Grand Prize at the 2008 Coleman Competition, First Prize at Chamber Music Yellow Springs 2008, and the Silver Medal at the 2008 and 2009 Fischoff Chamber Music Competitions. It was the first ensemble to win the Yale School of Music’s Horatio Parker Memorial Prize (2009), selected by the faculty for “best fulfilling… lofty musical ideals.” In 2010 the quartet joined the roster of Astral Artists after winning that organization’s national auditions. In addition to their continuing work with Astral, the ensemble is now managed by Barrett Vantage Artists.

Based in New Haven, Connecticut, the quartet holds ensemble-in-residence positions at Oberlin Conservatory of Music and Classic Chamber Concerts in Naples, Florida. They recently completed their two-year Ernst C. Stiefel Quartet Residency at the Caramoor Center for the Music and the Arts.

The Cleveland Quartet Award will be presented on January 15, 2012, at Chamber Music America’s National Conference in New York City. During the 2012–13 and 2013–14 concert seasons, the Jasper String Quartet will perform at each of the following presenters: Buffalo Chamber Music Society; Carnegie Hall; Chamber Music Society of Detroit; Freer and Sackler Galleries of Art at the Smithsonian; Friends of Chamber Music (Kansas City, MO); Market Square Concerts (Harrisburg, PA); Krannert Center at the University of Illinois at Urbana-Champaign (Urbana, IL); and the University of Texas at Austin.

Given biennially, the award honors and promotes a rising young string quartet whose artistry demonstrates that it is in the process of establishing a major career. Providing the quartet with concert appearances on chamber music series around the country, the award enriches the presenters' offerings while helping outstanding young artists gain wide recognition.