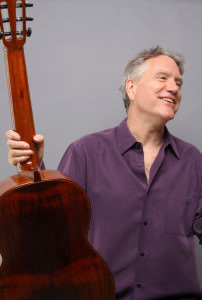 The Yale School of Music presents classical guitarist Benjamin Verdery in a Faculty Artist Series concert on Tuesday, November 29. Verdery will perform his own music as well as that of other Yale composers: Martin Bresnick, Christopher Theofanidis, Ezra Laderman, David Lang, and Jack Vees.

The concert will feature multiple premieres, including the world premiere of Verdery’s arrangement of David Lang’s “Little Eye,” which the composer based on the passage of time playing the game “I spy with my little eye” on long car trips with children. Jack Vees will be a guest performer in "Little Eye."

Verdery will also give the Yale premieres of his own piece “Now and Ever” and of “January Echoes” by Christopher Theofanidis.

Several composers have composed music for Verdery, including Daniel Asia, John Anthony Lennon, Ingram Marshall, Anthony Newman, and Roberto Sierra. On this concert are Ezra Laderman’s “On Vineyard Sound” and Martin Bresnick’s “Joaquin is Sleeping” (2008), both solo classical guitar pieces written for Verdery. The program will also include “National Anthem,” a piece by Jack Vees for electric guitar and tape based on a song by the band The National.

Described as “iconoclastic” and “inventive” by the New York Times, Benjamin Verdery enjoys an innovative and eclectic musical career. Since 1980 he has performed worldwide at venues including Theatre Carré (Amsterdam), the International Guitar Festival (Cuba), Wigmore Hall, the 92nd Street Y, Chamber Music Society of Lincoln Center, and the Metropolitan Opera. His tours regularly take him to Canada, Europe, Asia, and throughout the United States. He has recorded and performed with such diverse artists as Andy Summers, Leo Kottke, Jessye Norman, Paco Peña, and John Williams.

Benjamin has released over 15 albums, most recently Happy Here with William Coulter (Mushkatweek) and Branches with works from J.S. Bach to Jimi Hendrix (Mushkatweek). Start Now (Mushkatweek) won the 2005 Classical Recording Foundation Award, and Some Towns & Cities won the 1992 Best Classical Guitar Recording from Guitar Player Magazine.
Many of Benjamin Verdery's compositions have been performed, recorded and published over the years, including the recent What He Said (premiered by the Assad Duo at the 92nd St Y); Now and Ever (for David Russell, Telarc), and Peace, Love and Guitars for John Williams and John Etheridge (SONY). Since 1985 Benjamin has been chair of guitar at the Yale School of Music and artistic director of the bi-annual Yale Guitar Extravaganza. He is also the artistic director of Art of the Guitar at the 92nd St Y since 2006 and an honorary board member of the Suzuki Association of the Americas. Each summer Benjamin holds his Annual International Master Class on the Island of Maui (Hawaii).