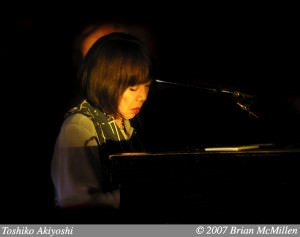 The Ellington Jazz Series at the Yale School of Music continues its 2011–2012 season on Friday, December 9 with a concert featuring the Toshiko Akiyoshi Quartet.

Akiyoshi demonstrates, in the words of one reviewer, “…a level of compositional and orchestral ingenuity that made her one of perhaps two or three composer-arrangers in jazz whose name could seriously be mentioned in the company of Duke Ellington, Eddie Sauter, and Gil Evans.” Her arrangements are particularly distinctive for incorporating elements of traditional Japanese music. 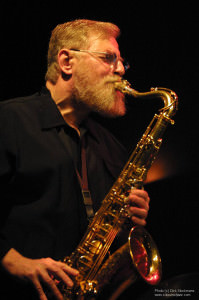 As a flutist, Tabackin has won first place for flute in the Swing Journal Reader's poll four years in a row, as well as the DownBeat International Critics Poll in 2010. His distinctive tenor sax style includes the use of wide intervals and abrupt changes of mood and tempo. Akiyoshi and Tabackin met in 1968 and have been performing together ever since. The two are married.

The concert will begin at 8 pm at Morse Recital Hall, located in Sprague Memorial Hall at 470 College Street, New Haven.

Willie Ruff, the director of the Ellington Series, has dubbed the 2011–2012 season "A House Full of Rhythm." The series continues with the Ron Carter Trio on March 23 and Matt Wilson's Arts + Crafts on May 11. For more information on the Ellington Jazz Series at Yale, visit music.yale.edu/concerts/ellington.

About the Featured Performers

Born and raised in Manchuria, Toshiko Akiyoshi started piano lessons at age six. Ten years later her family moved to Japan, where she first heard and began playing jazz. Her mastery of Bud Powell's bebop style earned her steady work with Tokyo's best bands. After being noticed by Oscar Peterson, she studied at the Berklee College of Music. Married for a time to altoist Charlie Mariano, she co-led the Toshiko Mariano Quartet in the early 1960s and worked with Charles Mingus in 1962. Akiyoshi formed a quartet with her second husband, Lew Tabackin, in 1970. Two years later, she put together her impressive big band, which recorded several notable albums. Among her many honors are the Shijahosho, from the Emperor of Japan; Liberty Award, from the City of New York; a Japan Foundation Award, and NEA Jazz Master. In 2002 she retired her big band projects and returned to the piano, touring as a trio and a quartet with Lew Tabackin. As an arranger, Akiyoshi has been particularly notable for incorporating elements of traditional Japanese music. She ranks as one of the top jazz arrangers of the past several decades.

Lew Tabackin, a flutist and tenor saxophonist, is an artist with a distinctive style. Tabackin studied flute and then tenor saxophone in high school and majored in flute at the Philadelphia Conservatory of Music. After his U.S. Army service, Mr. Tabackin moved to New York, where he played in numerous big bands and worked with the studio band for Dick Cavett's television show. In Europe, he was a soloist with orchestras including the Danish Radio Orchestra. In 1968 he met Toshiko Akiyoshi. They eventually married and, in Los Angeles, formed the award-winning Toshiko Akiyoshi Jazz Orchestra. In the 1980s he began to gain recognition as a flutist, winning many DownBeat critics’ and readers’ polls. Since then he has solidified his position as a major tenor saxophone and flute artist. In 1990 Mr. Tabackin released his first disc for Concord, Desert Lady, followed by the acclaimed I'll Be Seeing You. Mr.Tabackin has been associated with all-star bands including George Wein's Newport All-Star Band, the New York Jazz Giants, and the Carnegie Hall Jazz Band. He continues to tour the world as a soloist.