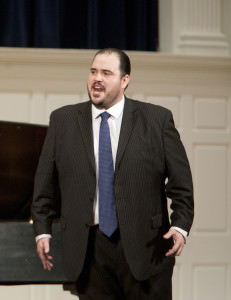 The Yale School of Music will present Liederabend: An Evening of German Art Song on Monday, December 12, 2011.

The concert will feature the singers of Yale Opera in a selection of German Romantic lieder. The event takes place at 8 pm in Morse Recital Hall in Sprague Hall (470 College St., New Haven).

On the program are German art songs by Schubert, Schumann, and Brahms, as well as Hugo Wolf, Carl Loewe, and Richard Strauss. The concert will also include music of Gustav Mahler, who is best known for his symphonies but also wrote numerous songs, and by his wife Alma Mahler.

Pianists Timothy Shaindlin and Kyle Swann will accompany the singers. Doris Yarick Cross is the artistic director of Yale Opera. The next Liederabend performance will take place on Thursday, March 22, 2012.

The concert is free and open to the public; no tickets are required. For more information, call the Yale School of Music concert office at 203 432-4158 or visit music.yale.edu.