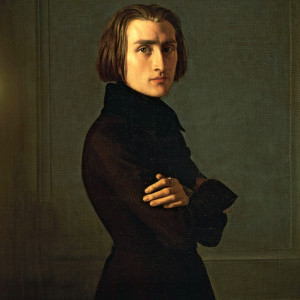 This fall the Gilmore Music Library marks Liszt’s 200th birthday with an exhibit entitled Franz Liszt: Transcending the Virtuosic. The most dazzling pianist of the nineteenth century, a strikingly innovative composer; an important conductor, teacher, and author; and a charismatic personality, Liszt was as one of the most talented, colorful, and influential figures in the history of music.

The exhibit features five musical manuscripts wholly or partly in Liszt’s hand, four of his letters (including ones to his daughter Cosima and his friend Robert Schumann), three early printed editions of his music, two books about Liszt (a biography published during his lifetime and a novel by an alumna of Yale’s PhD program in musicology), three images (depicting Liszt in boyhood, middle age, and old age), and a medallion that was owned at various times by Liszt, Toscanini, and Horowitz. There is also a rose that he is said to have kissed.