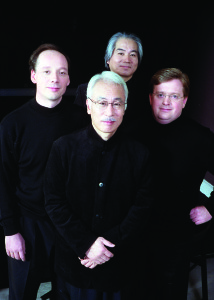 The Yale School of Music presents the Tokyo String Quartet in concert on Tuesday, January 10, 2012. The ensemble, now celebrating its thirty-fifth year in residence at the Yale School of Music, will perform quartets by Haydn, Bartók, and Dvorák. The concert begins at 8 pm in Morse Recital Hall.

The New York Times has praised the Tokyo String Quartet for nothing less than “exemplary chamber music,” and the Toronto Star has called it “an established ensemble playing as one living, breathing organism.”

The concert is part of the Oneppo Chamber Music Series at Yale. The concert begins at 8 pm in Morse Recital Hall, located in Sprague Hall at 470 College Street, New Haven.

The Tokyo String Quartet has captivated audiences and critics alike since it was founded forty years ago. Regarded as one of the supreme chamber ensembles of the world, the quartet – Martin Beaver and Kikuei Ikeda (violins), Kazuhide Isomura (viola), and Clive Greensmith (cello) – has collaborated with a remarkable array of artists and composers, built a comprehensive catalogue of critically acclaimed recordings, and established a distinguished teaching record. Performing over a hundred concerts worldwide each season, the Tokyo String Quartet has a devoted international following that includes the major capitals of the world and extends to all corners of the globe. Officially formed in 1969 at the Juilliard School of Music, the quartet traces its origins to the Toho School of Music in Tokyo. Soon after its formation, the quartet won First Prize at the Coleman Competition, the Munich Competition, and the Young Concert Artists International Auditions. An exclusive contract with Deutsche Grammophon firmly established it as one of the world's leading quartets, and it has since released more than forty landmark recordings. The ensemble now records on the Harmonia Mundi label.