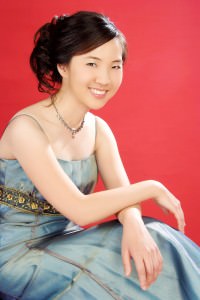 The Yale School of Music presents the pianist Wen-Yin Chan in a Doctor of Musical Arts recital on Thursday, January 12, 2012. Ms. Chan, who was born in Taiwan, lives in Washington, D.C., and has performed around the world, will play a diverse program of music by Chopin, Szymanowski, Schubert, and George Crumb.

Chan’s performance will open with Crumb’s “A Little Suite for Christmas,” an intimate suite of seven pieces written in 1979. Chan will then play Chopin’s Three Mazurkas, Op. 56. The first half will conclude with Szymanowski’s virtuosic “Serenade de Don Juan,” the last of the three Masques, Op. 34 (1915).

The second half of the concert will feature Schubert’s Sonata in B-flat major, D. 960, one of the last works the composer wrote before his death at age 31.

The recital is free and open to the public; no tickets are required. For more information, call the Yale School of Music concert office at 203 432-4158 or visit music.yale.edu.

Taiwanese pianist Wen-Yin Chan has performed in such venues as Carnegie Hall, Steinway Hall, Minneapolis Orchestra Hall, and the Taiwan National Recital Hall. She has appeared with the Fort Collins Symphony Orchestra and the Winnipeg Symphony Orchestra. An active chamber musician, Ms. Chan has performed in festivals throughout the United States, including Ravinia, Taos, and Kneisel Hall. At the age of 14, she won the first prize at the prestigious Taiwan National Music Competition, and a year later, she was awarded the second prize at the Taipei Chopin Piano Competition. In 1996, she received a special prize from the Moscow International Chopin Piano Competition for Young Artists, after which she was invited to perform at the Polish Embassy in Moscow. Ms. Chan studied with Peter Serkin at the Curtis Institute of Music, where she earned her Bachelor of Music degree. She continued her studies under the tutelage of Claude Frank at Yale School of Music, where she received her Master of Musical Arts degree in 2006. Ms. Chan is currently a member of the piano faculty at the Levine School of Music in Washington, DC.