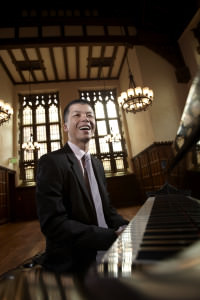 The Horowitz Piano Series at the Yale School of Music presents a recital by the “untiring, passionate, and poetic” (Classics Today) pianist Wei-Yi Yang on Wednesday, January 25. Mr. Yang’s performances have been described by critics as “sensational” (New York Times) and “a joy to behold” (Classics Today). An associate professor of piano at the School of Music, Mr. Yang is internationally acclaimed for his recitals, chamber music collaborations, and appearances with orchestra.

The program will include three masterworks by Maurice Ravel and Franz Schubert. The program opens with Ravel’s Valses nobles et sentimentales (Noble and Sentimental Waltzes), an elegant tribute to the waltzes of Vienna and Schubert. The program continues with Ravel’s enigmatic symbolist collection Miroirs (Mirrors or Reflections). Each of the five movements carries a evocative title, such as “A Boat on the Ocean” or “The Valley of Bells,” that is depicted in the eloquent, coloristic music.

The program concludes with Schubert’s monumental Sonata in A major, D. 959. Written a year after Beethoven’s death, and three months before Schubert’s own, this sonata makes stylistic references to Beethoven while preserving Schubert’s unswerving lyricism.

Pianist Wei-Yi Yang enjoys a flourishing concert career, appearing before audiences in North and Central Americas, Asia, Europe, and Australia. The New York Times praised him as the soloist in a “sensational” performance of Messiaen’s Turangalîla-Symphonie at Carnegie Hall. Winner of the Gold Medal and Grand Prize in the San Antonio International Piano Competition, Mr. Yang has performed in such prestigious venues as Lincoln Center, Merkin Hall, the Kennedy Center, and Kumho Art Hall (Seoul), among many others. Born in Taiwan of Chinese and Japanese heritage, Mr. Yang studied with Arkady Aronov at the Manhattan School of Music and has worked with such artists as Claude Frank, Peter Frankl, Murray Perahia, and Hans Graf. Under the guidance of Boris Berman, Mr. Yang was awarded a DMA from Yale in 2004. He can be heard on the Renegade Classics, Albany, and Holland-America Music Society labels. He has appeared at festivals in Novi Sad, Monterrey, Kotor, Norfolk, and La Jolla, among others. Mr. Yang has recently collaborated with such artists as Frederica von Stade and the Pacifica, Cassatt, and Tokyo String Quartets. He joined the Yale faculty in 2005.