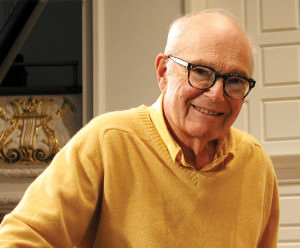 The Yale School of Music presents a New Music New Haven performance on Thursday, February 2 at 8pm in Morse Recital Hall in Sprague Hall (470 College St., New Haven, corner of Wall St.). The performance will feature the Piano Sonata No. 5 of Yale faculty composer Ezra Laderman. YSM alumna Amy Yang ’10 AD, who has been hailed by the New York Concert Review as “a magnificent artist and poet,” will perform the sonata.

Stephen Feigenbaum’s Fantasy for oboe and piano explores a new take on the relationship between performer and accompanist, with the piano taking a largely commentary role and the oboe holding together the piece’s groundwork. Collideoscope, a piano quartet by Jordan Kuspa, dramatizes the composer’s interactions with a work of art.

The program will also include Orbis Tertius, a exploration of extra-terrestrial fanfares by Matthew Welch for the unique combination of brass septet and bagpipes.

The composers, aside from Laderman, are graduate students in the School of Music’s prestigious composition program. The New Music New Haven concert series is directed by Christopher Theofanidis.

Admission to the concert is free. For more information, visit music.yale.edu or contact the Yale School of Music concert office at 203 432-4158.

A distinguished and widely performed composer, Ezra Laderman has composed works commissioned by the Chicago Symphony, New York and Los Angeles Philharmonics, the orchestras of Philadelphia, Minnesota, Dallas, Houston, Detroit, New Haven, and many others; and the New York City, Turnau, and Tri-Cities operas. He has also written works for such ensembles as the Tokyo, Juilliard, and Vermeer quartets and for soloists Yo-Yo Ma, Jean-Pierre Rampal, Sherrill Milnes, and Emanuel Ax, among others. Laderman is the recipient of three Guggenheim Fellowships, the Prix de Rome, and Rockefeller and Ford Foundation grants. He has served as president of the National Music Council, chair of the American Composers Orchestra, director of the NEA Music Program, and president of the American Music Center. He was elected to the American Academy and Institute of Arts and Letters in 1989 and became its president in 2006. From 1989 to 1995 he served as dean of the Yale School of Music.