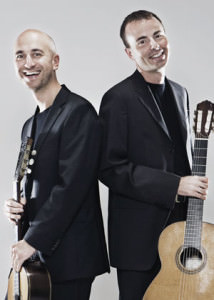 The Yale School of Music is pleased to announce the line-up for the seventh semiannual Guitar Extravaganza. The event, which will take place on Saturday, March 24, 2012, is directed by celebrated guitarist Benjamin Verdery, the longstanding chair of the guitar department at the Yale School of Music.

The Extravaganza brings together guitar lovers for a day of concerts, lectures, exhibits, master classes, and other events. Performances will feature both students and established artists. Events will take place mainly in Sprague Hall (470 College Street, New Haven), as well as in Sudler Hall (in W.L. Harkness Hall, 100 Wall Street) and the Collection of Musical Instruments (15 Hillhouse Avenue).

The Dither Guitar Quartet plays an eclectic mix of experimental music for electric guitars. Their concert, which begins at 2 pm, will feature their signature blend of composed music, improvisation, and electronic manipulation. 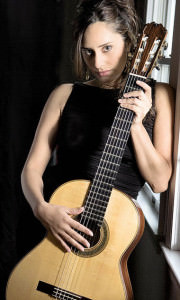 Kim Perlak, a School of Music graduate, specializes in American music (classical, jazz, and traditional) and has been featured on NPR and CBS Sunday Morning. Zaira Meneses, a Mexican-born guitarist hailed as “stunning” (Syracuse News), was recently praised for her “fluid, colorful style” by the New York Times. The two join together at 6 pm in a concert featuring music of the Americas.

SoloDuo, the acclaimed Italian duo comprised of Matteo Mela and Lorenzo Micheli, will perform the event’s final concert at 8 pm. “Do not miss a chance to hear them,” commands the New York Concert Review. “It is hard to say what left more of an impression: their remarkable blend, their sublime artistry, or their impeccable technique.”

The Guitar Extravaganza will also offer events such as workshops, panel discussions, and master classes. A complete schedule is available at music.yale.edu/events/guitar.

Full-day passes, offering admission to all events, are $40, $25 for students. Group discounts are available. This event is supported by the D’Addario Foundation for the Performing Arts.

For more information, call the Yale School of Music concert office at 203 432-4158 or visit music.yale.edu.