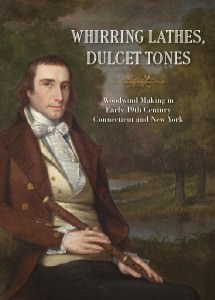 Twenty-six woodwind instruments are on display, including flageolets, fifes, a piccolo, flutes, clarinets, and a bassoon.

The most unusual instrument featured in the exhibit is a bass clarion (a bass clarinet in the shape of a bassoon) made by Uzal Miner after a design that his mentor George Catlin patented in the early 1800s.

Enhancing the displays of instruments are period portraiture, genre scenes, newspaper advertisements, instrument tutors, and instruction books. Facsimiles of engravings enable viewers to see what kind of lathes were used in the turning of woodwinds at this time. Actual wood samples acquaint viewers with the different species of woods that were favored by makers: boxwood, satinwood, rosewood, cocuswood, ebony, and maple. 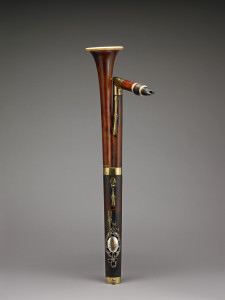 The exhibit was organized by Susan E. Thompson, a curator of the Collection. Thompson was assisted by three museum interns, two of whom are recent graduates of the School of Music, and one who will graduate this spring: Bethany Wiese ’10 MM, Scott Holben ’10 MM, and Ian Petruzzi ’12 MM.

Monica Ong Reed, the School's Design Manager, carried out the design of the forthcoming exhibit catalogue; Hal Schwartz of Yale's Printing and Production Services will oversee its production.

Whirring Lathes, Dulcet Tones will remain on view until June 29, 2012.