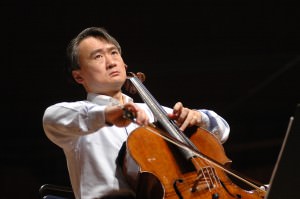 The Yale School of Music presents the Philharmonia Orchestra of Yale in a concert of music for chamber orchestra on Friday, February 24 at 8 pm.

Renowned cellist Aldo Parisot will conduct his former student Wang Jian (pictured at left) in a Haydn cello concerto, and Chinese conductor Xu Zhong will lead the orchestra in the chamber arrangement of Mahler’s Fourth Symphony.

While the Yale Philharmonia usually performs in Woolsey Hall, this concert will be performed in the more intimate space of Morse Recital Hall, located in Sprague Memorial Hall (470 College Street, corner of Wall Street).

The concert opens with Haydn’s Cello Concerto in C major, featuring soloist Jian Wang, a graduate of the School of Music (’88 CERT) and a protégé of the late Isaac Stern. The renowned cellist Aldo Parisot, who last year celebrated his fiftieth year on the Yale faculty, will conduct the concerto.

In 1921, Mahler’s Symphony No. 4 in G major – already the most compact of Mahler’s symphonies – was arranged for a small chamber orchestra. The arrangement was created for Vienna’s Society for Private Musical Performances, which offered enthusiasts a way to hear new compositions. 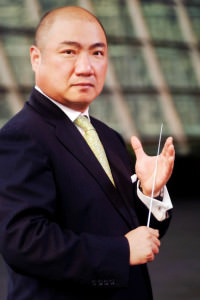 Xu Zhong (pictured at right), who has earned international renown as both pianist and conductor, will conduct the symphony. Heather Buck, a School of Music alumna (’96 MM), will be the soprano soloist. Buck has been praised by Opera News for “combining agile, liquid soprano [with] a bright, natural stage presence and the timing of an expert comedienne.”

Jian Wang began to study the cello when he was four. While a student at the Shanghai Conservatory, he was featured in the celebrated documentary film From Mao to Mozart: Isaac Stern in China. Mr. Stern’s encouragement and support paved the way for him to go to the United States, and in 1985 he entered the Yale School of Music to study with the renowned cellist Aldo Parisot. Jian Wang has since performed with many of the world’s leading orchestras, including the Cleveland, Philadelphia, Chicago and Boston Symphony, Berlin Philharmonic, Royal Concertgebouw, the BBC orchestras, Zurich Tonhalle, Gothenburg Symphony, Stockholm Philharmonic, and NHK Symphony. He has worked with many of the greatest conductors, including Abbado, Swallisch, Jarvi, Chailly, Dutoit, Eschenbach, Chung, Alan Gilbert, and Gustavo Dudamel. Among his many recordings are an album of pieces for cello and guitar called Reverie (Deutsche Grammophon); the Bach cello suites; a Baroque album with the Camerata Salzburg; the Brahms Double Concerto with the Berlin Philharmonic, Claudio Abbado, and Gil Shaham; and Messiaen’s Quartet for the End of Time with Myung-Whun Chung, Gil Shaham, and Paul Meyer. 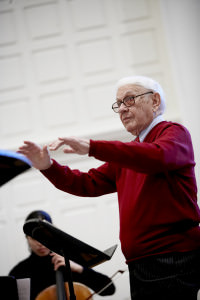 Aldo Parisot, long acknowledged as one of the world’s master cellists, has led the career of a complete artist—as concert soloist, chamber musician, recitalist, and teacher. He has been heard with the major orchestras of the world, including those of Berlin, London, Paris, Amsterdam, Stockholm, Rio, Munich, Warsaw, Chicago, Los Angeles, and Pittsburgh, under the batons of such conductors as Stokowski, Barbirolli, Bernstein, Mehta, Monteux, Hindemith, and Villa-Lobos. Mr. Parisot has premiered numerous works for cello, written especially for him by such composers as Quincy Porter, Joan Panetti, Ezra Laderman, Yehudi Wyner, and Heitor Villa-Lobos, whose Cello Concerto No. 2, written for and dedicated to him, was premiered by Mr. Parisot in his New York Philharmonic debut. Since then he has appeared with the Philharmonic on nearly a dozen occasions. He created a sensation when he introduced Donald Martino’s Parisonatina al’Dodecafonia at Tanglewood. Mr. Parisot has recorded for RCA Victor, Angel, Westminster, and Phonodisc. His Yale Cellos recording for Delos, Bach/Bachianas, was nominated for a Grammy Award in 1988. He was awarded an honorary Doctor of Music degree from Shenandoah University in 1999, an honorary Doctor of Fine Arts from Penn State University in 2002, and the Award of Distinction from the Royal Northern College of Music in Manchester, England, in 2001. A Yale faculty member since 1958, Mr. Parisot was named the Samuel Sanford Professor of Music at Yale in 1994 and received the Gustave Stoeckel Award in 2002.

Xu Zhong, an internationally renowned Chinese pianist and conductor, is the artistic director of the China Shanghai International Piano Competition and the executive artistic director of the Shanghai Philharmonic Orchestra. After studying at the Shanghai Conservatory of Music and the Conservatoire National Superieur de Musique de Paris, Xu Zhong won the Hamamatsu, Santander Paloma O’Shea, Tokyo, and Tchaikovsky International Piano Competitions. Since then, his concert career has spanned North and South America, Europe, and Asia. He has enjoyed successful collaborations with musicians including Paul Badura-Skoda, Sergiu Commissiona, Philippe Entremont, and Ian Hobson, and  has worked with Orchestre de Paris, China Philharmonic, Moscow State Symphony Orchestra, the Concertgebouw, and the symphony orchestras of Vancouver, Houston, and Tokyo, among many others. As an educator, Xu Zhong gives master classes and is a regularly jury member of international piano competitions such as the Busoni, Clara Haskil, AXA Dublin, and Leeds. He is a music consultant for Shanghai Concert Hall and the deputy chairman of the Shanghai Oriental Art Center Arts Committee. 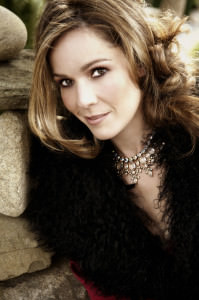 Soprano Heather Buck, praised as “the kind of performer who makes it all look easy,” has established herself internationally as a consummate singing actress, “combining agile, liquid soprano, a bright, natural stage presence, and the timing of an expert comedienne” (Opera News). She can be heard as Lulu Baines in Elmer Gantry with Florentine Opera, which was recorded for the Naxos label (released in 2011), nominated for three Grammy awards and voted No. 1 by Opera News “Best of the Year.” She has sung with such companies as English National Opera, New York City Opera, Central City Opera, Boston’s Handel and Haydn Society, Spoleto Festival USA, Opera Theatre of St. Louis, Opera Birmingham, Opera Delaware, Wolf Trap Opera, Calgary Opera, and Santa Fe Opera, among numerous others. Ms. Buck holds a Master of Music degree from the Yale School of Music, where she studied with Doris Yarick-Cross.