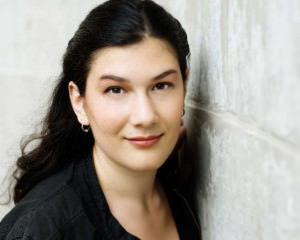 This season, Annie Rosen appears with Yale Opera as Dorabella in Così fan tutte and with the Yale Baroque Opera Project as Penelope in Il ritorno d'Ulisse in patria, before spending the summer as an Apprentice Artist with the Santa Fe Opera. She has been called an “excellent vocal soloist” by the New York Times and praised by Opera News for her “dulcet, sweetly phrased” singing.

Recent operatic roles include La Ciesca / Gianni Schicchi and La Marchande / Les mamelles de Tirésias with the Central City Opera; Dido / Dido and Aeneas with Yale Opera; Hansel / Hansel and Gretel with Opera Theater of Connecticut; and Alessandro (cover) / Tolomeo with Glimmerglass Opera. Rosen made her Carnegie Hall recital debut in December with the Italian Academy Foundation. Last season she performed Mahler's Symphony No. 2 with the New Haven Symphony Orchestra, Britten's Phaedra with the Yale Recital Orchestra, and Bach's Mass in B minor with the Cappella Cantorum of Connecticut.

She earned her B.A. with distinction in music from Yale College and her M.M. in vocal performance from the Mannes College of Music, where she was awarded the Shoshana Foundation's Richard F. Gold Career Grant in 2010. A native of New Haven, she studies with Doris Yarick Cross in the Yale Opera program.