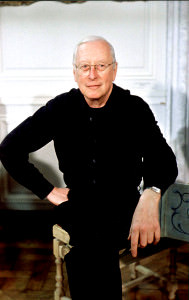 The Yale School of Music presents guest conductor William Christie in an all-Handel concert on Saturday, February 25. Christie, a graduate of the School of Music and the founder of the acclaimed early music ensemble Les Arts Florissants, returns to Yale to lead the Yale Philharmonia and the new Yale Choral Artists in a program dedicated to the music of George Frideric Handel.

The renowned keyboard player Arthur Haas will play harpsichord and organ. The four members of the Yale Baroque Ensemble, a post-graduate ensemble dedicated to historical performance practice, will be the orchestra’s principal string players for this concert.

The concert opens with Handel’s stately overture to the oratorio Solomon and continues with the Funeral Anthem for Queen Caroline, The Ways of Zion Do Mourn. The second half of the concert features the Concerto Grosso in G minor, Op. 6, No. 6, HWV 324. The Yale Choral Artists re-join the orchestra to conclude the concert with the celebratory Coronation Anthem No. 3: The King Shall Rejoice.

The New Yorker wrote that Christie’s “position in the world of early music is not unlike that of Zeus in a Baroque-opera production, gliding over the mortals in a bright chariot.” The Guardian notes that Christie’s contributions to early music have seen him “honored by academia, critics, the public and the French state.”

Renowned throughout Europe and North America as both a performer and teacher of Baroque music, the highly sought-after Arthur Haas has recorded and performed alongside Alan Curtis and William Christie, as well as Julianne Baird, Laurence Dreyfus, and Dawn Upshaw. 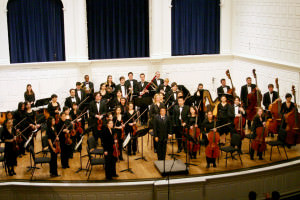 The evening will also mark the premiere performance for the Yale Choral Artists, an ensemble comprised of leading professional singers from around the country and directed by Yale faculty member Jeffrey Douma. Since 2003, Douma has directed the undergraduate Yale Glee Club, which last season was hailed by The New York Times as “One of the best collegiate singing ensembles, and one of the most adventurous.” Read more about the new ensemble here.

While the Yale Philharmonia usually performs in Woolsey Hall, this concert will be performed in the more intimate space of Morse Recital Hall, located in Sprague Memorial Hall (470 College Street, corner of Wall Street). The concert begins at 8 pm.

William Christie, harpsichordist, conductor, musicologist and teacher, is the founder of the acclaimed Les Arts Florissants. His pioneering work has led to a renewed appreciation of Baroque music in France and beyond. Born in Buffalo, William Christie studied at Harvard and Yale and has lived in France since 1971. Christie is an acknowledged master of tragédie-lyrique as well as opéra-ballet, and his increasingly busy operatic career includes collaborations with renowned theatre and opera directors such as Jean-Marie Villégier, Alfredo Arias, Jorge Lavelli, Graham Vick, and Luc Bondy. He has worked with the Opéra de Paris, Théâtre de Caen, Opéra du Rhin, Théâtre du Châtelet, and the Aix-en-Provence Festival. In demand as a guest conductor, William Christie receives regular invitations from opera festivals such as Glyndebourne, Zurich Opera, and the Opéra national de Lyon. Since 2002, he has appeared regularly as a guest conductor with the Berlin Philharmonic. William Christie acquired French nationality in 1995. He is an Officier dans l’Ordre de la Légion d’Honneur as well as Officier dans l’Ordre des Arts et des Lettres.

The Yale Choral Artists is a new professional choir, organized by the Yale School of Music and the Yale Glee Club to enhance and enrich Yale's strong commitment to the choral arts. The choir is a project-based ensemble comprised of leading singers from around the country and is directed by School of Music faculty member Jeffrey Douma. Current members of Choral Artists perform in the ranks of such acclaimed ensembles as the Trinity Wall Street Choir, the Handel and Haydn Society Chorus, Musica Sacra, the Oregon Bach Festival Chorus, Conspirare, and many others, and are also leading concert soloists, particularly in the area of early music. Tonight's collaboration with William Christie marks the debut of the Choral Artists. This coming June, they will perform a program of contemporary American music as a featured ensemble at the Yale International Choral Festival.  During their residence at the festival, they will also mentor current Yale undergraduate singers and the festival's Conducting Fellows, and will collaborate on a performance of Bach and Vivaldi with the Mark Morris Dance Group.

Harpsichordist and organist Arthur Haas is renowned throughout Europe and the United States as a peerless pedagogue and performer of Baroque and contemporary music. After receiving top prize in the 1975 Paris harpsichord competition, he performed at most major French early music festivals. He has also appeared as a soloist in the Dresdner Festspiele, Mostly Mozart (New York), and the Berkeley Music Festival, among others. His musical partners have included Julianne Baird, Phoebe Carrai, William Christie, and Paul O’Dette. He played the premiere performance of William Albright's Concerto for Harpsichord and Orchestra in 1994. Currently he is a member of the Aulos Ensemble, Musical Assembly, and Collegium Atlantis. Praised by Le Monde for his interpretation of French keyboard music, Arthur Haas has recorded duo harpsichord music of Gaspard LeRoux with William Christie and solo CDs of music by Jean-Henri d’Anglebert, Forqueray, and more. Much in demand as a teacher, Haas is a faculty member of summer early music music institutes in Berkeley, Amherst, and the Longy School of Music.