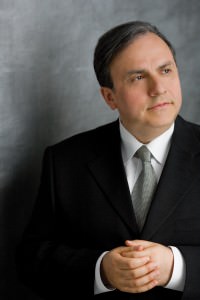 The Horowitz Piano Series at the Yale School of Music presents the pianist Yefim Bronfman in recital on Tuesday, February 28. The “brilliant soloist” (New York Sun), hailed for both “technical brawn and a glittery grace” ­(Los Angeles Times), will perform a powerhouse program featuring sonatas by Haydn, Brahms, and Prokofiev.

Bronfman, who last performed at Yale in 2007, will open the concert with Haydn’s Sonata in C major, Hob. XVI:50. One of the last sonatas Haydn wrote, it showcases the composer’s balance of inventiveness, grace, and wit.

The next composer on the program is Brahms, who at the age of twenty wrote his third and final piano sonata. The five-movement Sonata in F minor, Op. 5, will complete the first half of the concert.

Particularly noted for his interpretations of contemporary Russian repertoire, Bronfman will crown the recital with a performance of Prokofiev’s Sonata No. 8 in B-flat major, Op. 84. The third of Prokofiev’s War Sonatas, the piece will show off Bronfman’s “uncanny ability to make the musical texture unfailingly clear throughout” as well as “his range of sonority – from lyrical to pungent, to explosive” (Wall Street Journal).

Grammy Award-winning pianist Yefim Bronfman has wowed critics and audiences worldwide with his solo recitals, prestigious orchestral engagements, and expanding catalogue of recordings, being especially admired for his performances of modern Russian repertory. Bronfman’s commitment to chamber music has led to collaborations with quartets such as the Emerson and Guarneri, and artists including Isaac Stern, Yo-Yo Ma, and Pinchas Zukerman. His wide-ranging discography includes Bartók’s three piano concertos with Salonen and the Los Angeles Philharmonic, which won a Grammy in 1997. Recent releases feature Salonen’s works; Beethoven concertos with Gil Shaham, Truls Mørk, and the Tonhalle Orchestra; Tchaikovsky’s first concerto with Jansons and the Bavarian Radio Symphony; and a recital disc – Perspectives – complementing Bronfman’s 2007-08 Carnegie Hall “Perspectives” series. Having trained at the Juilliard School, Marlboro, and the Curtis Institute, with Rudolf Firkusny, Leon Fleisher, and Rudolf Serkin, Bronfman was awarded the prestigious Avery Fisher Prize in 1991.