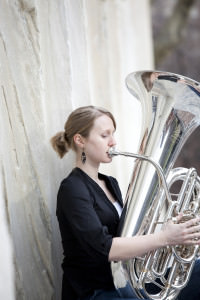 Dean Blocker announced that Carol Jantsch will join the Yale School of Music faculty next fall. Jantsch has been the principal tuba of the Philadelphia Orchestra since 2006. She won the position while still a senior at the University of Michigan, becoming the first female tuba player in a major symphony orchestra.

Raised in a musical family, Carol Jantsch began piano lessons at age six and began studying euphonium at Interlochen Arts Camp at age nine. After switching to tuba, she attended the Interlochen Arts Academy, graduating as salutatorian of her class. She continued her studies at the University of Michigan under the tutelage of Fritz Kaenzig. During this time, Carol was very active with auditions and competitions, winning first place in four international solo tuba competitions, and receiving laureates at several others. After winning her position with the Philadelphia Orchestra in February of 2006, she returned to Michigan to complete her Bachelor of Music degree, graduating summa cum laude.

Carol has appeared as a soloist with the Columbus Symphony Orchestra, St. Petersburg Symphony Orchestra, Henry Mancini Institute Orchestra, and the United States Marine Band, among others. She has performed in Carnegie’s Zankel Hall with the Musical Olympus Festival, has appeared on NPR’s radio series From The Top, and has been a featured artist at various brass festivals in Finland, Germany, Canada, and the United States. In 2009, Carol was honored with a Best of Philly award from Philadelphia Magazine.

Carol has given master classes in Europe, Asia, and North America. She is on the faculty of the Curtis Institute of Music, Temple University Boyer College of Music, and Manhattan School of Music. Starting in fall 2012, Carol will also be Lecturer in Tuba at the Yale University School of Music. In 2009, Carol released her first solo recording, Cascades.