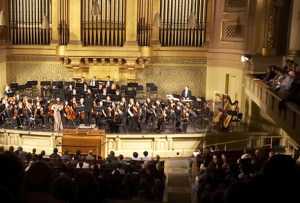 The School of Music is pleased to announce the details for the 2012 Woolsey Hall Concerto Competition. The finals of the competition will be held on Saturday, March 31.

Preliminary rounds will be held in individual studios and departments before March 3. (Students who would like to enter the preliminaries should contact their primary teachers.)

In the finals of the annual Woolsey Competition, students perform for approximately ten minutes before a panel of distinguished judges. Up to three winners are chosen; winners will appear as soloists with the Philharmonia Orchestra of Yale next season.

The Woolsey Competition is one of only two competitions at the Yale School of Music; the other is open to chamber music ensembles and offers the chance to perform on the Oneppo Chamber Music Series.

Violinist Shmuel Ashkenasi has been called “genuine talent and profoundly gifted” by The Vienna Express. He toured the Soviet Union twice and concertizes every year throughout Europe, Israel, and Asia. He has performed with American orchestras such as the Philadelphia Orchestra, Los Angeles Philharmonic, and Boston, Chicago, National,  and Atlanta Symphonies, as well as the Vienna Symphony, Royal Philharmonic, and the orchestras of Berlin, Hamburg, Munich, Zurich, Rotterdam, Geneva, and Stockholm. He has appeared with conductors including Stokowski, Boehm, Kempe, Leinsdorf, and Kubelik. Among his solo recordings are the Paganini Violin Concertos Nos. 1 and 2 with the Vienna Symphony on the Deutsche Grammophon label, the two Beethoven Romances, and the Mozart A Major Concerto. In addition, as first violinist of the Vermeer Quartet, he received five Grammy Award nominations and has gained a reputation as one of the world’s outstanding chamber musicians. Born in Tel Aviv, Israel, Mr. Ashkenasi attended the Musical Academy of Tel Aviv before coming to the United States on a scholarship to study with Efrem Zimbalist at the Curtis Institute of Music. He won the Merriweather Post Competition, was a finalist in Belgium’s Queen Elisabeth Competition, and received second prize in the International Tchaikovsky Competition in Moscow. Mr. Ashkenasi is currently on the faculty at Roosevelt University, the Curtis Institute, and Rutgers University.

Clarinetist Ayako Oshima has won numerous international competitions, including the Japan Music Competition in Tokyo, the Winds and Percussion Competition in Japan, and the International Jeunesses Musicales Competition in Belgrade, where she also received the Golden Harp Award, given to the favorite of the audience and critics. She has performed as soloist with the Hiroshima and Osaka Symphonies and with the Jupiter Symphony in New York City. She has participated in the Sarasota Summer Music Festival in Florida, the Festival Consonances in France, and in Japan the Mt. Fuji and the Kirishima International Music Festival. Ms. Oshima is a member of the award-winning Contrasts Quartet. Ayako Oshima received clarinet training in France, from the Toho School of Music, and as a "special student" at the Eastman School of Music. She is on the faculties of the Juilliard School and the State University of New York at Purchase and is the director of the Kitakaruizawa Music Seminar in Japan. With her husband, Charles Neidich, she has written a book on the basics of clarinet technique for the publisher Toa Ongaku.

The distinguished American soprano Benita Valente studied with Lotte Lehmann at the Music Academy of the West and with Martial Singher at the Curtis Institute of Music. After winning the Metropolitan Opera Auditions in 1960, she pursued further studies with Margaret Harshaw. She established herself as a versatile recitalist, soloist with orchestra, and opera singer. At the Metropolitan Opera she sang Pamina, Gilda, Nanetta, Susanna, Ilia, and Almirena. Other roles include Euridice at Santa Fe, the Countess in Le Nozze di Figaro in Washington, and Dalilah in Florence. Festival appearances include Tanglewood, Aspen, Ravinia, Grand Tetons, Santa Fe, Vienna, Edinburgh, and Lyon. Valente has also been an internationally celebrated interpreter of Lieder, chamber music, oratorio, and opera. Her keen musicianship encompasses an astounding array of styles. Her major chamber music collaborators have included the Guarneri, Juilliard, and Orion String Quartets, cellist Yo-Yo Ma, clarinetist Richard Stolzman, guitarist Sharon Isbin, and pianists Rudolf Serkin, Peter Serkin, Emanuel Ax, Leon Fleisher, Richard Goode, Malcolm Bilson, and Cynthia Raim. Benita Valente has sung under the batons of Abbado, Barenboim, Bernstein, Eschenbach, Harnoncourt, Levine, Masur, Muti, Ozawa, and Slatkin. Valente received a Grammy Award for her recording of Arnold Schoenberg's String Quartet No. 2 and a Grammy nomination for her recording of Haydn's Seven Last Words of Christ, both with the Juilliard String Quartet. Benita Valente was the 1999 Recipient of Chamber Music America's highest award, the Richard J. Bogomolny National Service Award, the first vocalist to receive the award in its twenty-year history.