“In a word: delightful.” –Goldberg Magazine 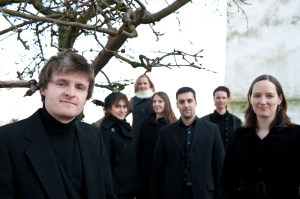 The Yale Collection of Musical Instruments presents the acclaimed ensemble La Morra in Lacrime di Leo: A Concert for Pope Leo X. In this program, La Morra imagines that one day, Pope Leo calls upon his musicians to play the best music popular in Italy at the time.

The program will be presented on Sunday, February 26 at 3 pm at the Yale Collection of Musical Instruments (15 Hillhouse Avenue, New Haven).

Though Pope Leo X (1513–1521) may be remembered mostly for his extravagant lifestyle (he infamously said, “Since God has given us the Papacy, let us enjoy it!”), he was also a music lover and a patron of the arts. He even wrote music himself, some of which will be performed in this concert.

La Morra, which specializes in European music from the late Medieval and early Renaissance periods, will play both instrumental and vocal music, including madrigals, chansons, and frottole (an Italian secular song that preceded the madrigal).

LA MORRA, named after Heinrich Isaac’s famous instrumental piece, performs European music of the period from roughly 1300 to 1500 (traditionally referred to as ‘late Medieval’ and / or ‘early Renaissance’) with occasional escapades outside this time frame. Soon after its formation in 2000, La Morra took the stages of Europe’s most prestigious early music festivals and concert series by storm, including concerts in Belgium, Holland, Francy, Switzerland, and Italy. Concert tours have also taken the ensemble to Cyprus, Estonia, Finland, Germany, Poland, Spain, and the United Kingdom. Numerous live performances, broadcasts, and five CDs to date contributed to establishing La Morra as a leader in the field. The ensemble is reputed for evocative, thoroughly researched concert programming and interpretations that are “skillful,” “elegant” (Early Music), “virtuoso,” “seductive” (Diapason), and “delightful” (Goldberg Magazine). La Morra makes its home in Basle, the cultural capital of Switzerland. The ensemble –usually up to ten vocalists and instrumentalists working under the joint artistic leadership of Corina Marti and Michal Gondko – re-defines itself according to the requirements of concert or recording projects it undertakes.