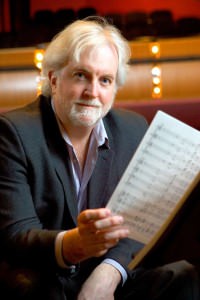 Aldridge is a professor at the John J. Cali School of Music at Montclair State University. Along with librettist Herschel Garfein (also of Montclair State), he was awarded the Grammy for Best Contemporary Classical Composition for the opera Elmer Gantry.

In addition, the recording of the opera won the Grammy for Best Engineered Album, Classical. The CD's producer, Blanton Alspaugh, had been nominated for a Grammy for Producer of the Year (Classical), but he did not win in that category. (Read more about Aldridge's win here.)

The Grammy Award for Classical Instrumental solo went to a performance of Joseph Schwantner's Concerto for Percussion and Orchestra. Christopher Lamb was the soloist; Giancarlo Guerrero conducted the Nashville Symphony.

Joseph Schwantner was a member of the YSM composition faculty from 1999 to 2003.