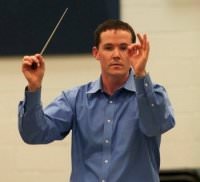 The announcement was made on February 9; presentation ceremonies will be held in conjunction with the annual Convention of the Texas Bandmasters Association meeting in San Antonio in July.

Ryan Johnstone is in his third year as the director of band program at Aledo Middle School in Aledo, Texas. Previously, he was an associate director at Aledo High School for three years.

Mr. Johnstone began teaching in 2005 after earning a Master of Music degree in trombone performance from the Yale School of Music. Johnstone is also a 2003 graduate of the Curtis Institute of Music.

The AMS Honor Winds are a consistent sweepstakes award winner at UIL and invitational festivals.  They have been named a National Winner in the Mark of Excellence National Wind Band Honors Competition and have also been awarded Best in Class at several invitational festivals.  In 2011, the AMS Honor Winds was named third runner-up in the TMEA Class CCC Honor Band Competition in Texas.

The Young Bandmaster of the Year award is sponsored by Alpha Chapter of Phi Beta Mu, an honorary International Bandmasters Fraternity.  To be eligible for consideration, a Band Director must have produced and maintained an outstanding and consistent band program in the Texas public schools and to have taught for less than 10 years. A standing committee of the Fraternity accepts nominations once a year and then pursues an evaluation process of each candidate prior to the selection by the active Alpha Chapter membership.  For more information about Phi Beta Mu, please visit the website at www.tmea.org.