“A pianist of purified technique and enormous sensitivity.”
– La Provincia 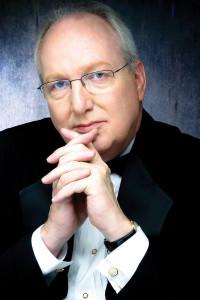 The Horowitz Piano Series at the Yale School of Music presents a recital by the pianist Robert Blocker, on Wednesday, March 21. Blocker, hailed as “a pianist of purified technique and enormous sensitivity,” will perform a diverse program of music from the Baroque to the present day, including pieces by two Yale faculty composers.

Each half will open with musical fantasies, beginning with Haydn’s Fantasia in C major, Hob. XVII:4. The first half will also feature Schumann’s Fantasiestücke, Op. 12, a collection of eight character pieces, and Martin Bresnick’s Strange Devotion. Bresnick’s work, which is dedicated to Blocker, was inspired by Francisco de Goya’s etching Extraña Devoción, from the series Caprichos Enfáticos. Bresnick is a member of the School of Music’s composition faculty.

The second half of the concert reaches back to the Baroque, opening with J.S. Bach’s Fantasia in C minor. Next will be another collection from the Romantic period: Brahms’s masterful Six Piano Pieces, Op. 118.

The concert will close with another piece by a Yale faculty member, Ezra Laderman; Decade was written for Robert Blocker after his first ten years as Dean of the School of Music. After Blocker premiered the work in 2009, the Hartford Courant wrote: “Decade is a new piano work worth getting excited about.”

Robert Blocker is highly regarded internationally for his artistry as a pianist and his leadership as an advocate for the arts. In 1995 he was appointed the Henry and Lucy Moses Dean of Music and Professor of Piano at Yale University. Today, he concertizes throughout the world. Recent orchestral engagements include the Beijing, Shanghai, Korean, and Daejon Symphony Orchestras, Prague and Moscow Chamber Orchestras, Monterrey Philharmonic, and the Houston Symphony, as well as appearances at the Beethoven Festival (Warsaw) and Great Mountains International Music Festival (Korea). In 2006 Blocker was named honorary Professor of Piano at the Central Conservatory of Music in Beijing. Robert Blocker appears regularly on national radio and television as an artist and commentator and is active as a consultant to major educational institutions and government agencies. In 2000, Steinway and Sons featured him in a film commemorating the tercentennial year of the piano. His recording of Mozart concerti with the Biava Quartet was released by Naxos in 2008 to critical acclaim. In 2004, Y Yale University Press published The Robert Shaw Reader, a collection of Shaw’s writings edited by Blocker.