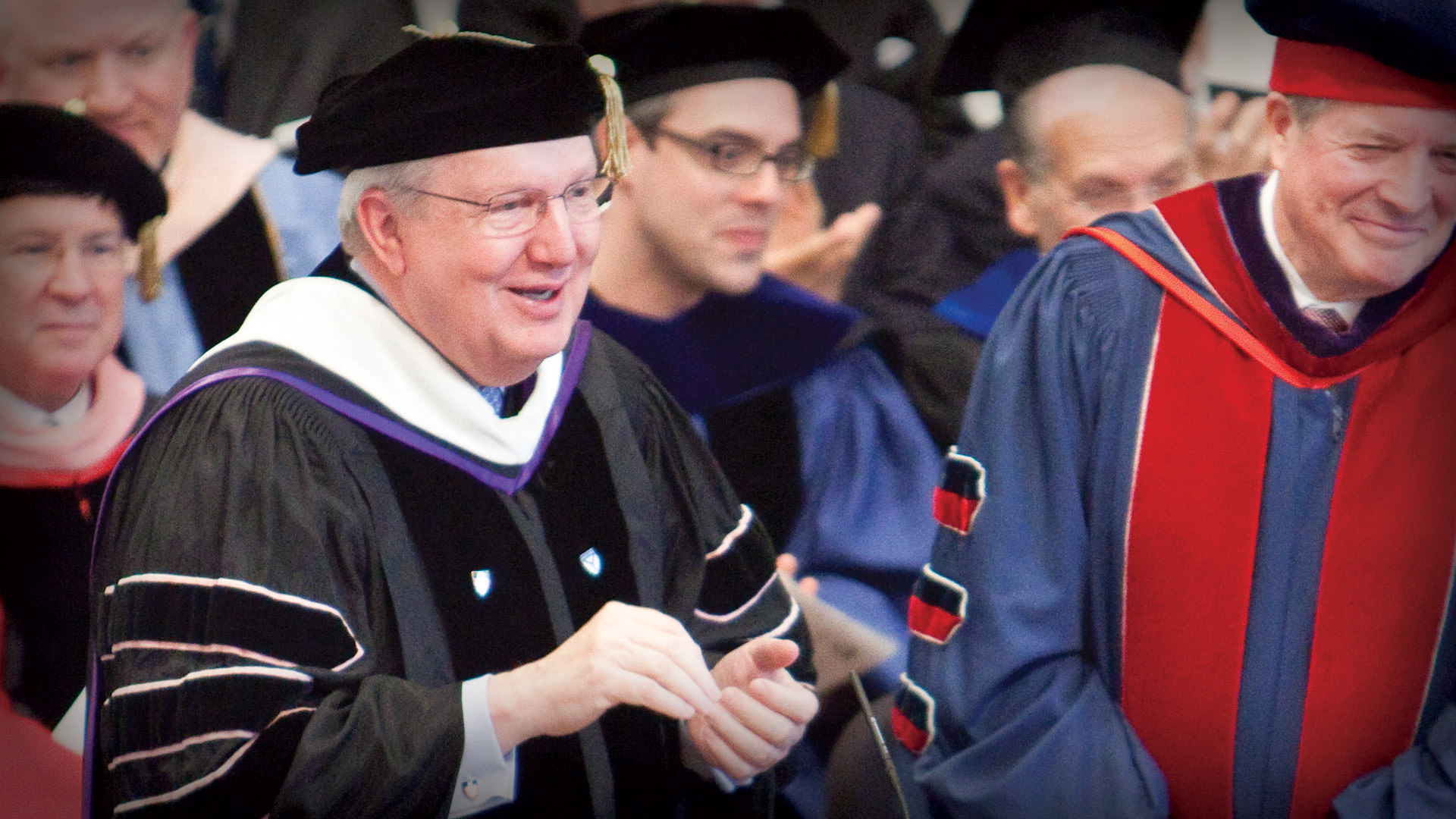 The Yale School of Music held its Commencement exercises on Monday, May 21, 2012 in Morse Recital Hall in Sprague Hall. Here is the text of Dean Robert Blocker's address to the Class of 2012.

In his epic poem THE FOUR QUARTETS, T.S. Elliot offers this revelation:

What we call the beginning is often the end. And to make an end is to make a beginning. The end is where we often start from.

For many of us, the introduction of the fermata to our musical vocabulary and skill marked our passage from the mathematical exactness of notation to a discretionary choice. As a seven-year old, I was fascinated with this new freedom – much more so than my teacher thought necessary or amusing. Fortunately, she was endowed with extraordinary patience. Her words still echo in my mind: “Linger, Robert, don’t hurry, think about the next phrase. Take time, observe the fermata.”

Here we are, celebrating the metaphorical final cadence of your Yale Opus. Think of these next few minutes as a grand pause on a resounding cadential chord. It is a time to look backward with pride and forward with hope as you continue your journey.

With each passing year, I find the decanal task of this charge to graduates to be more daunting. No comment about your artistic and creative skill is prudent or needed, but it does seem very strange to offer counsel from a generation that has left you with an impoverished world through greed, violence, and ignorance, one now diminished by its loss of human dignity.

Music, according to Voltaire, is one of humankind’s four basic needs, the other three being food, clothing, and shelter. Our art is not merely virtuosic skill concerned with bravura. Music is a custodian of our intellectual, emotional, and ethical values, those things that define who we are as a civilization.

Your journey to Yale began the moment you realized that music had chosen you and that any other pursuit would likely be futile. The journey chronicles our lives, our long walk, and our quest for a distinctive musical voice.

To produce real music, musicians must cross the threshold of chronological time to establish a rhythmic flow of sound images and silences in an eternal present here/now. They must situate themselves at the intersection of the timeless with time.

Who heard your degree recital in this hall? Does it live in your mind, in the neural libraries of those who attended, and is it possible – even probable – that your music – as energy, as life force – is heard by others in the universe? Indeed, the ineffable wonder and mystery of music has not yet been reduced to simple equations!

Second, music – and indeed all the arts, according to Robert Shaw – testifies to the ability of the human brain to select and reject, to relate and combine, and to achieve order and beauty. Shaw further states:

Third, music is a bridge of understanding between cultures and people. It holds affective powers of tolerance and respect.

Ivan Illich comments that “it is not so much the words of another that we must learn in order to understand him, but rather his silences. It is through the medium of our pauses that we make ourselves understood.” The musical bridges of understanding convey and transport our human expressions when language and symbols cannot serve us.

Finally, the adventure of discovering and developing your distinct musical voice has hopefully been transformative. Recently my wife shared Constantine Cavafy’s poem entitled “Ithaka” with me. Ithaka is the Grecian isle in the Ionian Sea, not the city where some of you resided while at Cornell. The poet paints a picture of the joyous journey to Ithaka, seeing new harbors, shopping at Phoenician trading stations, meeting different people – and he implores the reader not to hurry the journey, to pause frequently. Upon arrival at Ithaka, the traveler finds that the journey itself was Ithaka’s gift. The final stanza reads:

And if you find her poor, Ithaka won’t have fooled you. Wise as you will have become, so full of experience, you will have understood by then what these Ithakas mean.

At YSM, you have found a place that teaches you to develop your native talent, to compete against yourself, and to embrace your musical gifts. Also, we have tried to inculcate in you a call to cultural leadership. If your Yale Opus was transformative, you will leave this place with a thinking heart and feeling mind, a thinking heart and a feeling mind. Simply put, your world view as an artist will be marked by humility and vulnerability, by a sense of passion for what you do, and compassion for those you serve through your artistry.

William Sloan Coffin, one of Yale’s most revered chaplains, said that Socrates had it wrong. "It is not the unexamined but finally the uncommitted life that is not worth living. There is a difference in having success and being successful." If we use music selfishly, we paradoxically impoverish the values that music seeks to exalt. The birthright of music for humankind is our responsibility, especially in a tormented world.

Rabbi Tarphon’s Talmudic wisdom reverberates clearly: “You are not required to complete the work, but neither are you free to desist from it.” Throughout his life, Robert Louis Stevenson was often sick. His accomplishments in literature were all reached despite the handicap of weakness. One particular night of a childhood illness, his nurse found him out of the warm bed with his nose pressed against the damp, cold window. “Come to bed, Master Robert, you’ll catch your death of cold,” she cried. But the young boy was entranced by the work of the old lamplighter going down the street in the dark Edinburgh nightfall. “Come and look,” he called to his nurse, “there’s a man going down the street making holes in the dark.”

Observe the fermatas in your life! Take them regularly in your journey, and be strengthened and comforted by the pauses, the reflection, and the silence. With thinking heart and feeling mind, make holes in the dark with the beauty and light of your music.

Thank you, and God bless you all.