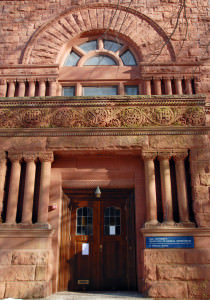 The Yale Collection of Musical Instruments opens its 2012–2013 concert season on Sunday, September 23 with “Crossing the Rhine,” a concert of 18th-century music from France and Germany featuring the acclaimed trio of Wieland Kuijken, viola da gamba; Eva Legêne, recorder; and Arthur Haas, harpsichord.

Reviewing a performance by the trio in The Berkshire Review, Seth Lachterman wrote: “Nothing… could have prepared me for the extraordinary elegance of today’s recital with renowned gambist Wieland Kuijken, recorder virtuoso Eva Legêne, and harpsichordist Arthur Haas.”

The concert begins at 3 pm at the Collection, which is located at 15 Hillhouse Avenue. Tickets are $20, $15 for seniors, and $10 for students. For more information, call the Yale School of Music concert office at 203 432-4158 or visit music.yale.edu/concerts.

Belgian musician Wieland Kuijken is a player of the viola da gamba and baroque cello. He is widely regarded as one of the most influential pioneers in the twentieth century revival of the viola da gamba and early cello. Specializing in the bass viol, Wieland Kuijken has performed and recorded a large repertoire as both a continuo player and soloist. His recordings of Bach, Marais, and Forqueray have garnered critical acclaim, and his repertoire encompasses music by composers as late as Mozart and Boccherini. He has taught at the conservatories of Antwerp, Brussels, and the Hague, and has been a featured performer at festivals of early music such as Flanders, Saintes, and the English Bach Festival. His musical collaborators include his brothers, Sigiswald (violin) and Barthold (flute), as well as Jordi Savall and Gustav Leonhardt.

Recorder virtuosa Eva Legêne is known throughout Europe, North America, Australia, and Asia for her remarkable performances. She is a frequent guest at international festivals and has appeared in concert with renowned early music artists such as Frans Brüggen, Hopkinson Smith, Bruce Dickey, and John Gibbons, and regularly tours with gambist Wieland Kuijken. As a soloist she premiered Bernhard Heiden’s Concerto for Recorder with the Minneapolis Chamber Orchestra, and performed Steve Stucky’s Concerto for Recorder and Orchestra (Etudes) with the New Music Ensemble at Jacobs School of Music (Bloomington, Indiana). In 2007, she premiered and recorded Gerald Plain’s Recorder Concerto with the Cleveland Chamber Symphony Orchestra. Legêne has published several articles on the recorder and related issues, and has recorded for radio and television in Europe, North America, Australia, and Asia, and for the labels Telefunken, Denon, Focus, and Rondo Records.

The American harpsichordist and organist Arthur Haas is renowned throughout Europe and the United States as a pedagogue and performer of baroque and contemporary music. After receiving top prize in the 1975 Paris harpsichord competition, he performed at major festivals including the Festival Estival de Paris, Mai Musical de Bordeaux, and the Festival de Saintes. He has also appeared as a soloist in the Festival de Saintes, Spectaculum (Vienna), Festwochen der alten Musik (Innsbruck), Mostly Mozart (New York), and the Berkeley Music Festival. His musical partners include Phoebe Carrai, William Christie, Paul O’Dette, and Marion Verbruggen. In 1994, he gave the premiere of William Albright’s Concerto for Harpsichord and Orchestra. Currently he is a member of the Aulos Ensemble, Musical Assembly, and Collegium Atlantis. Praised by Le Monde for his interpretation of French keyboard music, Haas has recorded duo harpsichord music of Gaspard Le Roux with William Christie and solo CDs of music by Jean-Henri d’Anglebert and Forqueray. Arthur Haas is a faculty member of the Yale School of Music, as well as summer early music institutes in Berkeley, Amherst, and the Longy School of Music.