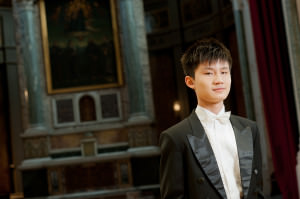 The Yale School of Music presents the teenage piano star Niu Niu in a special concert on Sunday, September 23 at 5 pm. The 15-year-old pianist, hailed not only for his virtuosity but for the elegance and sensitivity of his playing, will perform music of Scarlatti, Beethoven, and Liszt.

“It is a concert no one should miss,” said Robert Blocker, Dean of the School of Music. The event is free and open to the public.

Niu Niu will open the recital with two sonatas by Domenico Scarlatti: the Sonata in E Major, K. 380, and Sonata in A minor, K. 54. Next he will be play Beethoven’s “Appassionata” Sonata in F minor, Op. 57. The concert, which will be performed without intermission, concludes with three pieces by Franz Liszt: Isoldens Liebestod (piano transcription of the closing scene from Wagner’s opera Tristan und Isolde); Liebestraum No. 3 in A-flat major; and the Mephisto Waltz No. 1.

Niu Niu studies at the New England Conservatory with Hung-Kuan Chen, who is a faculty member of both NEC and the Yale School of Music.

“Piano is much more exciting than Xbox to me,” said young Niu Niu in an interview with the Shenzhen Daily. “Computer games are virtual, and no matter how well you play a game, it’s pretend. Music is different. When you play the piano, experience the music and feel the nuances of mood, tempo, color and texture, everything is real.”

Dean Blocker noted: “The Artemisia Foundation identifies prodigy pianists from throughout the world and presents them in major artistic capitals. Their latest sensation is Niu Niu, a fifteen-year-old pianist who plays with technical brilliance and a poetic elegance that one might expect from an established, mature artist. We are fortunate that he has this date available following his Boston debut.”

Niu Niu is the affectionate nickname of Zhang Shengliang. The young Chinese pianist was born in 1997 in China’s Fujian province. He first showed talent at the age of three and received his first lessons from his father. Since the age of ten he has studied under the guidance of Hung-Kuan Chen, first in Shanghai and now in Boston.

Niu Niu made his concert debut in 2003, a few weeks after his sixth birthday. Shortly after, he became the youngest student in the Shanghai Conservatory's 81-year history. He was presented in recital at Wigmore Hall in London in 2006 and a year later returned to perform at the Pearl Awards. At age ten, Niu Niu became an exclusive recording artist for EMI – the youngest pianist to be signed to a major label. His debut album, Niu Niu plays Mozart, was released in 2006.

At age twelve, he became the youngest artist in the world to have recorded all of Chopin’s Etudes. He was also awarded the Prix Montblanc for most talented young artist in Europe, and at the Festival der Nationen in Germany he received the Festival's prize for Young Artist of the Year. Highlights of the 2012–2013 season include the release of his third album, a concert tour of Asia, and his American debut.