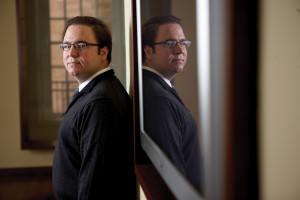 The Yale School of Music presents the world premiere of Allegory of the Cave by faculty composer Christopher Theofanidis on Thursday, October 4, 2012. The piece, written for string quartet and piano, will be performed by recent graduates of the School of Music, including .

“Theofanidis is an unusually skilled, communicative composer,” says the Baltimore Sun. “What impresses me about Theofanidis,” adds the Washington Post, “is his ability to blend several musical languages once thought to be mutually exclusive… the results are enormously attractive.”

Admission is free, and no tickets are required. The concert begins at 8 pm in Morse Recital Hall, located in Sprague Hall at 470 College Street. For more information, call the Yale School of Music concert office at 203 432-4158 or visit music.yale.edu.

ABOUT THE FEATURED COMPOSER

Composer Christopher Theofanidis has had performances by many leading orchestras from around the world, including the National Symphony, London Symphony, Oslo Philharmonic, the Atlanta and Houston Symphonies, California Symphony (for which he was composer-in-residence from 1994 to 1996), Brooklyn Philharmonic, and the Pro Arte Chamber Orchestra. He served as Composer of the Year for the Pittsburgh Symphony for the 2005–2006 season. He holds degrees from the Yale School of Music, the Eastman School of Music, and the University of Houston, and has been the recipient of the Masterprize, the Rome Prize, a Guggenheim Fellowship, the Barlow Prize, six ASCAP Gould Prizes, a Fulbright Fellowship to France, a Tanglewood Fellowship, and the American Academy of Arts and Letters’ Charles Ives Fellowship. Recent projects include an opera for the Houston Grand Opera, a ballet for the American Ballet Theatre, and a work for the Atlanta Symphony and Chorus based on the poetry of Rumi. He has served as a delegate to the U.S.-Japan Foundation’s Leadership Program. Christopher Theofanidis has served on the faculty of the Peabody Conservatory and the Juilliard School; he joined the Yale School of Music faculty in 2008.