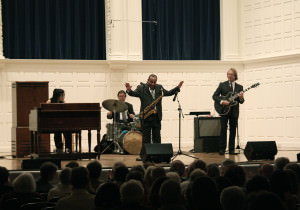 Lou Donaldson, the legendary saxophonist and recently named NEA Jazz Master, was awarded an Ellington Medal last Friday, October 5. Willie Ruff, the director of the Ellington Fellowship at Yale, conferred the medal during a concert featuring Donaldson and his quartet. The concert, which took place in Morse Recital Hall, was the second event of the 2012–13 season of the Ellington Jazz Series at Yale. This year marks the 40th anniversary of the concert series. In 1972, Yale President Kingman Brewster presented the first Ellington Medals to thirty jazz greats, including the Duke himself. That year marked the beginning of a series of extraordinary jazz concerts performed by a virtual Who’s Who of jazz: Eubie Blake, Paul Robeson, Marian Anderson, Odetta, Joe Williams, Art Blakey, Kenny Clarke, Sonny Greer, Jo Jones, Max Roach, Ray Brown, Charlie Mingus, and Dizzy Gillespie, to name just a few. Since then, the Duke Ellington Fellowship has brought the giants of jazz to Yale’s concert halls and to the city's public schools. Ellington Medal recipients in recent years have included Frank Wess, the Heath brothers, and James Moody. The NEA's biography of Donaldson reads, in part: "When it comes to a jazzy soulful groove, it doesn't get much groovier than Lou Donaldson. His distinctive blues-drenched alto has been a bopping force in jazz for more than six decades. His early work with trumpeter Clifford Brown is considered one of the first forays into hard bop, and his first recordings with organist Jimmy Smith led to the groove-filled jazz of the 1960s and '70s… Donaldson is the recipient of an honorary doctorate of letters from his alma mater – now called the North Carolina Agricultural & Technical State University – that also awards an annual scholarship in his name to the school's most gifted jazz musician. He was also inducted into the International Jazz Hall of Fame in 1996." » loudonaldson.com