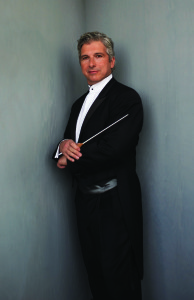 The Yale School of Music presents the Philharmonia Orchestra of Yale with guest conductor Peter Oundjian on Friday, October 19, 2012.Pianist Suzana Bartal ’13MM, a winner of this year’s Woolsey Competition, is the featured soloist. The concert, which includes music by Verdi, Bartók, and Shostakovich, takes place at 8 pm in Woolsey Hall.

Oundjian, the music director of the Toronto Symphony Orchestra and the Royal Scottish National Orchestra, is a member of the Yale School of Music faculty and the principal guest conductor of the Yale Philharmonia.

Verdi’s Overture to La Forza del Destino will open the program. Bartal is the soloist in Bartók’s Piano Concerto No. 3 in E major, a piece written as a surprise birthday present for the composer’s wife.

The second half of the concert features Shostakovich’s Symphony No. 12 in D minor. Subtitled “The Year 1917” and dedicated to Lenin, the symphony reveals Shostakovich’s complex give-and-take relationship with the Soviet authorities.

Admission to the concert is free, and no tickets are required. Click HERE to RSVP on Facebook.Woolsey Hall is located at 500 College Street (corner of Grove Street), New Haven. For more information, call the Yale School of Music concert office at 203 432-4158 or visit music.yale.edu.

The Philharmonia Orchestra of Yale is one of America’s foremost music school ensembles. The largest performing group at the Yale School of Music, the Philharmonia offers superb training in orchestral playing and repertoire. Performances include an annual series of concerts in Woolsey Hall, Yale Opera productions in the Shubert Theatre, and appearances at Carnegie Hall as part of the Yale in New York concert series. In addition, the Philharmonia Orchestra of Yale has performed on numerous occasions in Alice Tully Hall (New York City) and the Kennedy Center (Washington, D.C.). In 2008 the Philharmonia undertook its first tour of Asia, with acclaimed performances in the Seoul Arts Center, the Forbidden City Concert Hall and National Center for the Performing Arts (Beijing), and the Shanghai Grand Theatre.
» music.yale.edu/concerts/philharmonia

Violinist Peter Oundjian studied at the Royal College of Music in London, England. After winning the Gold Medal there, he went on to the Juilliard School to study with Ivan Galamian. He also worked with Itzhak Perlman, Dorothy DeLay, and members of the Juilliard String Quartet. In 1980 Professor Oundjian won first prize in the International Violin Competition in Vina del Mar, Chile. He has soloed with the Toronto, Montreal, and Winnipeg symphony orchestras, the National Arts Center Orchestra, and the Calgary Philharmonic, and was first violinist of the Tokyo String Quartet from 1981 to 1995. His formal conducting debut was in 1995 with the Orchestra of St. Luke’s. Since then he has conducted the Boston, Chicago, San Francisco, St. Louis, Houston, Cincinnati, and Berlin symphony orchestras, the Minnesota Orchestra, the Philadelphia Orchestra, the Los Angeles Philharmonic, Zurich Tonhalle, and the St. Paul Chamber Orchestra. He is the music director of the Toronto Symphony Orchestra, artistic director of the Caramoor Festival, and artistic director and principal guest conductor of the Detroit Symphony. He has been on the School of Music faculty since 1981.

Born in Timisoara, Romania, Suzana Bartal started playing the piano at the age of eight and made her debut with orchestra at thirteen. Her recital appearances have taken her throughout Romania, Hungary, France, Italy, Holland, and Germany. A prizewinner in numerous national and international competitions, Suzana has been awarded scholarships by the Yamaha Music Foundation of Europe, the Nadia et Lili Boulanger Foundation, the Mecenat Musical Societé Generale, and the ADAMI, and was a participant in the prestigious Long-Thibaud Competition in Paris (2009). Her performances have been broadcast in Romania, Hungary, and France. After graduating with honours from music high school, Suzana pursued her studies with Denis Pascal, Pierre Pontier, and Florent Boffard in Paris and at the Conservatoire National Superieur de Musique Lyon. She has also worked with musicians such as Andras Schiff, Menahem Pressler, and Tamas Vasary. She currently studies with Peter Frankl at the Yale School of Music.
» www.suzanabartal.net