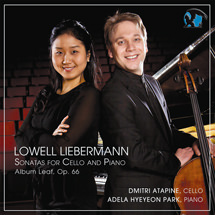 This marks the very first recording of all but one of the sonatas, and it is the first recording where all the works appear together. The critically-acclaimed duo worked closely with the composer before recording the CD, which was released on Blue Griffin Recording with distribution through Albany.

Atapine and Park are both on the faculty of the University of Nevada, Reno. Atapine is a professor of cello, and Park was recently appointed as a full-time piano professor.

While at Yale, Atapine studied with Aldo Parisot, and Park studied with Peter Frankl. Dmitri Atapine also is the founder and artistic director of a new concert series at UNR, the Argenta Concert Series.