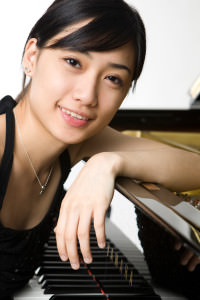 Pianist Lo-An Lin, a student of Hung-Kuan Chen, took home the Gold Medal and the prize for best performance of a Baroque work at the 2012 San Antonio International Piano Competition this past weekend.

As the Gold Medal winner, Lin receives not only a cash prize but a performance with the San Antonio Symphony, a solo recital performance at the Music from St. Marks concert series, a week of chamber music concerts with the Cactus Pear Music Festival, and a performance opportunity with the Fredericksburg Music Club.

The competition, which was held October 14–21 in San Antonio, Texas, is open to pianists of all nationalities between the ages of 20 and 32. The complete list of winners is posted here.

This year's competition included the world premiere of a work commissioned from composer Paul Moravec. Santiago Rodriguez was the chair of the jury; the other members were Lita Guerra, Boris Slutsky, Jeffrey Swann, and Ilana Vered.

Lo-An Lin was born in Taipei, Taiwan. She has appeared in recitals in Seoul National Arts Center (Korea), National Recital Hall (Taipei, Taiwan), and the Kennedy Center (Washington D.C.). Her performances have been broadcast on WQXR (New York) and ABC Classics (Australia).

Ms. Lin was invited as the guest artist to perform a solo recital at Kawai Keyboard Series at Queensland Conservatorium, Australia in 2008. She has also appeared as concerto soloist with the Queensland Orchestra in Australia, the Glenn Gould School Orchestra in Roy Thomson Hall (Toronto), the San Francisco Conservatory Orchestra, the Interlochen Arts Academy Orchestra, and the Eastern Music Festival Orchestra.

She currently studies with Hung-Kuan Chen in the Artist Diploma program at the Yale School of Music. She earned her Master of Music degree studying with Nelita True; graduated with a bachelor's degree and the Young Artist Award from the San Francisco Conservatory of Music; and earned her high school diploma from the Interlochen Arts Academy. 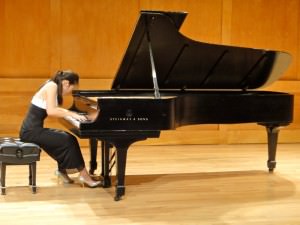 Dr. Mei Rui (pictured at right) is an internationally award-winning concert pianist, an avid chamber musician, and a dedicated piano teacher. A magna cum laude graduate of Yale, Mei holds dual degrees in molecular biochemistry and music, and has been a visiting assistant professor at the Sophie Davis Biomedical School at the City University of New York since 2008. Equally active as a soloist and a chamber musician, Mei has been invited to perform at the prestigious Ravinia Festival, Van Cliburn Piano Institute, Music Academy of the West, Norfolk Chamber Music Festival, The Perlman Festival, Taos School of Music, and Yellowbarn Chamber Music Festival.  She has collaborated with musicians such as Paul Katz, Issac Perlman, Roger Tapping, Peter Frankl, Claude Frank, and members of the Ariel Quartet.
» meiruipiano.com