"One of the most distinctive compositional voices to emerge in the second half of the twentieth century."
–AllMusic 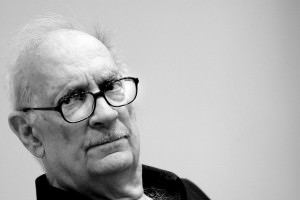 The Yale School of Music presents a New Music New Haven concert featuring the music of George Crumb on Thursday, November 15, 2012. One of today's most-performed composers, Crumb is the winner of a Pulitzer Prize, a Grammy Award, and numerous other honors.

The concert, which begins at 8 pm in Morse Recital Hall, will also include new works by graduate students in the School's composition program: Michael Gilbertson, Balint Karosi, and Benjamin Wallace. Christopher Theofanidis is the artistic director of New Music New Haven.

Two pieces by George Crumb will be featured: the early Vox Balenae (Voice of the Whale) for amplified flute, amplified cello, and amplified piano; and selections from the more recent American Songbook III, sung by faculty soprano Janna Baty and conducted by Paolo Bortolameolli.

Admission is free, and no tickets are required. Morse Recital Hall is located in Sprague Hall at 470 College Street, New Haven.

For more information, call the Yale School of Music concert office at 203 432-4158 or visit music.yale.edu.

George Crumb's reputation as a composer of hauntingly beautiful scores has made him one of the most frequently performed composers in today's musical world. Festivals devoted to his music have sprung up like wildflowers. He is the winner of a 2001 Grammy Award and the 1968 Pulitzer Prize in Music.  In the 1960s and 1970s, George Crumb produced a series of highly influential pieces that were immediately taken up by soloists and ensembles throughout the world. Many of these were vocal works based on the poetry of Federico Garcia Lorca, including Ancient Voices of Children (1970) and Songs, Drones and Refrains of Death (1968). Other major works from this period include: Black Angels (1970), for electric string quartet; Vox Balaenae (1971), for electric flute, electric cello and amplified piano; Makrokosmos, Volumes 1 and 2 (1972, 73) for amplified piano; and Crumb's largest score, Star-Child (1977). Recent works include Eine Kleine Mitternachtmusik for solo piano (2001), Otherworldly Resonances for two pianos (2002), and the four-part song cycle American Songbook (2001–2004).

George Crumb's music often juxtaposes contrasting musical styles, with references ranging from music of the western art-music tradition, to hymns and folk music, to non-Western musics. Many of Crumb's works include programmatic, symbolic, mystical and theatrical elements, which are often reflected in his beautiful and meticulously notated scores. A shy yet warmly eloquent personality, Crumb retired from his teaching position at the University of Pennsylvania after more than 30 years of service. Awarded honorary doctorates by numerous universities and the recipient of dozens of awards and prizes, Crumb was the 2004 Musical America Composer of the Year. George Crumb's music is published by C.F. Peters and the ongoing series of "Complete Crumb" recordings, supervised by the composer, is being issued on Bridge Records.