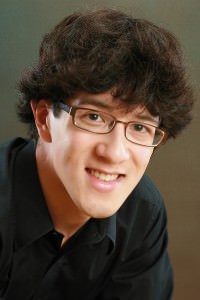 The third biennial James Mottram International Piano Competition took place Monday, November 26 through Saturday, December 1, 2012. The competition offers an all-round learning experience for young pianists from all over the world, mixing opportunities to perform on the concert platform with a series of master classes given by a distinguished international jury.

"It was a wonderful learning experience," said Dionne. "I greatly admired all of the artists on the jury and what they had to offer in master classes throughout the week."

Graham Scott, chairman of the jury, called the event "a truly magical week of music."

The three finalists in each category performed a concerto accompanied by the Royal Liverpool Philharmonic Orchestra under the baton of Hannu Lintu. Dionne performed Beethoven's Concerto No. 5 in E-flat major.

Lee Dionne is currently pursuing his M.M. degree at the Yale School of Music, where he studies withBoris Berman. Other major influences have been Wei-Yi Yang, Patricia Zander, Wilma Machover, and Michael Friedmann. Lee holds a B.A. in literature from Yale University, where he received top prizes in both comparative literature and music performance.

In the past year, Lee has had solo appearances in Holland and in Portugal, as well as Weill Recital Hall at Carnegie Hall, where his performance was hailed by the New York Times as “majestic, technically impressive.” A frequent performer of new music, Lee was featured at the Kennedy Center as part of the Three Cities Marathon in 2012. he has performed concertos with the Philharmonia Virtuosi and the Yale Symphony Orchestra. As a chamber musician, he received a fellowship at Norfolk in 2010 and appeared at Yellow Barn in summer 2012.