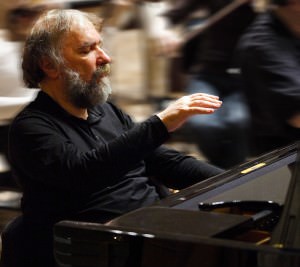 The Horowitz Piano Series at the Yale School of Music presents a recital by the Radu Lupu on Thursday, January 17.

Critics describe Lupu in otherworldly terms: he is “a mystic” who “communes with the score on his own terms” (Washington Post). The Guardian writes: “There is a visionary quality to this playing – ecstatic, deeply affecting, and peerless.”

In this recital, Lupu will perform music by Franz Schubert, César Franck, and Claude Debussy. The concert opens with Franck’s Prelude, Chorale, and Fugue, a masterpiece of the piano repertoire whose three movements are thematically interconnected.

Next will be Schubert’s Four Impromptus, Op. 142, which are often said to resemble a four-movement sonata. After intermission, Lupu will close the evening with Book Two of Debussy’s Préludes, written one hundred years ago in 1912–1913.

The concert takes place in the excellent acoustic of Morse Recital Hall, which is located in Sprague Memorial Hall at 470 College Street. The event is part of the Horowitz Piano Series, which is directed by Boris Berman.

Tickets to this performance are $20–$30, $10–15 with student ID. Sampler packages offer discounts of up to 20% from regular ticket prices. For more information or to purchase tickets, visit music.yale.edu or call the Yale School of Music concert office at 203 432-4158.

Radu Lupu is firmly established as one of the most important musicians of his generation and is widely acknowledged as a leading interpreter of the works of Beethoven, Brahms, Mozart and Schubert. Since winning the prestigious Van Cliburn (1966) and Leeds Piano Competitions (1969), Mr. Lupu has regularly performed as soloist and recitalist in the musical capitals and major festivals of Europe and the United States. Radu Lupu’s first major American appearances were in 1972 with the Cleveland Orchestra under Daniel Barenboim and with the Chicago Symphony under Carlo Maria Giulini. Concerts with the New York Philharmonic soon followed, and Mr. Lupu has since appeared with all of the foremost American orchestras. Radu Lupu has made more than 20 recordings for London/Decca, including the complete Beethoven concertos with the Israel Philharmonic and Zubin Mehta, the complete Mozart violin and piano sonatas with Szymon Goldberg, and numerous solo recordings of Beethoven, Brahms and Schubert. His London/Decca releases of Schubert’s Sonatas, D. 960 and 664, won a Grammy Award in 1995, and his disc of Schumann’s Kinderszenen, Kreisleriana, and Humoresque won an Edison Award in 1995.