The Misfits of Brooklyn’s Music Scene: It’s Been a Good Year for the Record Label New Amsterdam

On a recent evening in Williamsburg, a hipster headbanged along with the JACK Quartet’s rendition of William Brittelle’s “Future Shock,” which, while pop-sounding and electronic, had intricately layered string riffs and a classical structure.

The performance was part of a benefit for New Amsterdam Presents, which, along with its record label, has become an advocate for a corner of New York’s new-music scene that doesn’t quite belong—and doesn’t want to.

It has been a good year for the label. In addition to a handful of Grammy nominations, this year’s music Pulitzer was awarded to Caroline Shaw, for a work recorded on New Amsterdam. The group’s Red Hook office space has largely recovered from superstorm Sandy, although some questionable mold remains. END_OF_DOCUMENT_TOKEN_TO_BE_REPLACED 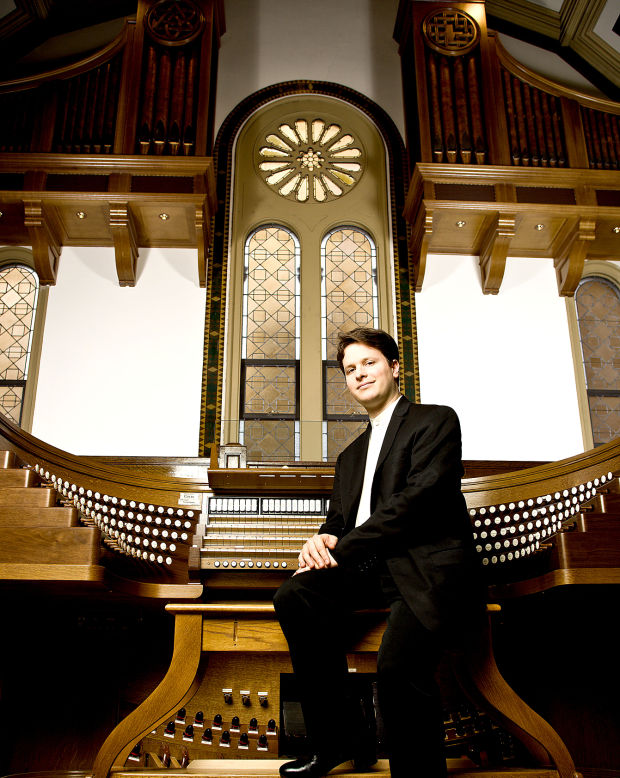 The renowned organist Paul Jacobs will present a concert next month in honor of the late esteemed organist Marianne Webb.

The performance will start at 7:30 p.m. Friday, Jan. 17 in SIU’s Shyrock Auditorium.

Ms. Webb served as a professor at SIU for almost 50 years and was credited with creating a rich and thriving environment for organ music performance in the region and across the United States. END_OF_DOCUMENT_TOKEN_TO_BE_REPLACED

Guitar Extravaganza 2014: Tradition and Innovation will take place Saturday, February 22, 2014. This is the eighth Yale Guitar Extravaganza, an event presented every 2–3 years that offers a daylong immersion in all things guitar. This season’s events features concerts, workshops, demonstrations, and more.

Concert artists include David Tanenbaum, René Izquierdo, Elina Chekan, and Van Stiefel, all of whom are alumni of the Yale School of Music. Panel discussions and workshops cover topics from education to composition, from early guitars to the electric guitar. Benjamin Verdery, the head of guitar at YSM, is the director of the Guitar Extravaganza.

David Tanenbaum will perform a concert of American music at 8 pm. He will be joined by four YSM string players in 100 Greatest Dance Hits by faculty composer Aaron Jay Kernis. The duo of René Izquierdo and Elina Chekan will give a joint concert at 5:30 pm. Van Stiefel will play music for electric guitar at 2 pm. END_OF_DOCUMENT_TOKEN_TO_BE_REPLACED

The Yale School of Music presents a recital by flutist

Ransom Wilson and pianist Melvin Chen on Wednesday, January 15 at 8 pm. The duo will perform music from across three centuries, from Haydn to Schubert to living composers. In addition, Wilson will play selections for solo flute.

The program opens with Joseph Haydn‘s Sonata in C major, Op. 87, followed by Robert Schumann‘s Three Romances, Op. 94. These are followed by Gaze, a three-movement piece written in the year 2000 by the American composer John Halle.

The second half of the concert focuses on the music of France, beginning with three selections for solo flute by Claude Debussy and his lesser-known compatriots Jean Rivier and André Jolivet-Ascèses. Debussy is also represented by his Prélude à L’après-midi d’un faune, arranged for flute and piano by Gustave Samazeuilh. END_OF_DOCUMENT_TOKEN_TO_BE_REPLACED

The program opens with Debussy’s Prelude to the Afternoon of a Faun, which was inspired by the eponymous poem by French symbolist poet Stéphane Mallarmé. Pierre Boulez considered the work a turning point in bringing classical music into the age of modernism, saying that “the flute of the faun brought new breath to the art of music.”

Internationally acclaimed pianist Peter Frankl will join the Philharmonia for Beethoven’s Piano Concerto No. 4 in G major, the next concert in the yearlong Beethoven Concerto Project. END_OF_DOCUMENT_TOKEN_TO_BE_REPLACED

The Ellington Jazz Series at the Yale School of Music has added another concert to its 2013–14 season: the David Hazeltine Trio will perform on Thursday, January 16 at 8 pm.

Hazeltine will perform with George Mraz on the bass and alto saxophone, and Billy Drummond on drums.

David Hazeltine is one of a handful of young pianists who has successfully forged his own distinctive style out of the accumulated weight of a modern piano tradition. His influences extend from Art Tatum and Bud Powell to such masters as Buddy Montgomery, Barry Harris, and Cedar Walton. Walton, a jazz piano legend and NEA Jazz Master, called Hazeltine “the brightest star on the jazz piano horizon style” and noted that “his style has a deep-seated commitment to jazz history while communicating a wealth of ‘today’s’ ideas.”

END_OF_DOCUMENT_TOKEN_TO_BE_REPLACED

Garth Neustadter will be home for the holidays, and he’s bringing with him a merry, musical gift.

Performances will include Manitowoc native Garth Neustadter, who in 2011 won a Primetime Creative Arts Emmy Award for Outstanding Music Composition, and his parents, Kris and Gary, as well as a variety of other performers.

Matthew Schliesman, executive director at the Capitol Civic Centre, said it’s the third large-stage production of the Garth Neustadter Trio at the Capitol in 2½ years. END_OF_DOCUMENT_TOKEN_TO_BE_REPLACED

The second MusicNOW program of the season served up one of the most compelling solo performances of the year, amid three other works that included a Mason Bates premiere.

Music for solo prepared piano seems to have gone the way of Nehru jackets over the last few decades—perhaps a victim of too many such works centered on mere sonic effects and gimmickry.

Monday night’s concert at the Harris Theater opened with Vick(i/y) by Andy Akiho. This remarkable 2008 work brings the prepared piano back to its roots, as an unorthodox tool to make music, not as a sound effects sampler or a quirky and “edgy” end in itself. END_OF_DOCUMENT_TOKEN_TO_BE_REPLACED

The MusiCorps Wounded Warrior Band will be the musical guest on the Colbert Report this Wednesday, December 18th, along with Aaron Neville. MusiCorps, founded and directed by Arthur Bloom ’86BA, ’93MM, ’94MMA, is an intensive music rehabilitation program for wounded service members.

The show, which will air at 11:30pm EST, 10:30 CST on Comedy Central, is part of Colbert’s Christmas Carols Week. The National, whose members include Bryce Dessner ’98BA, ’99MM, performed on the show Monday, December 16.

Bloom noted: “Almost everything we do is in private — one-on-one sessions at Walter Reed helping wounded warriors learn to play an instrument or relearn to play one following a devastating injury. So it is particularly gratifying when we are able to share our work with others through performances of the MusiCorps Wounded Warrior Band.”
END_OF_DOCUMENT_TOKEN_TO_BE_REPLACED

In addition to serving as Chorus pro Musica’s music director, Kirsch is also director of choral activities at Tufts University, where he conducts the Tufts Concert Choir and Chamber Singers, and teaches music theory and conducting.

Kirsch believes most people are capable of being taught music, but added for some it’s just innate.

“I think most people are moved by some kind of music,” he said. “I feel lucky to be able to mke my living in music.” END_OF_DOCUMENT_TOKEN_TO_BE_REPLACED