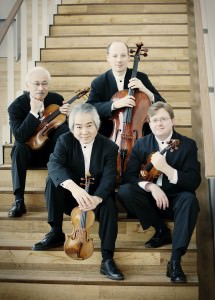 The Yale School of Music presents a concert featuring the Tokyo String Quartet on Tuesday, January 22. It will be the group's last performance on the Oneppo Chamber Music Series at the Yale School of Music; this is the ensemble's last season before retirement. In this valedictory performance, the quartet will perform music by Hadyn, Bartók, and Mendelssohn.

For the past 42 years, the Tokyo String Quartet has captivated audiences and critics with “rock-solid ensemble playing and immaculate, razor-edged precision” (Washington Post). Since 1976, they have also been in residence at the Yale School of Music, coaching chamber music and mentoring young ensembles.

The concert opens with Haydn's String Quartet in G minor, Op. 74, No. 3, nicknamed "Rider" for the galloping rhythms in the last movement. Bartók's Fourth String Quartet, composed in 1927, follows.

Mendelssohn's Quartet No. 4 in E minor, written in 1837, was one of the composer's favorites, and it was immediately popular with audiences as well. The piece will be the last that the quartet plays on the stage of Morse Recital Hall.

ABOUT THE TOKYO STRING QUARTET

The Tokyo String Quartet has captivated audiences and critics alike since it was founded forty years ago. Regarded as one of the supreme chamber ensembles of the world, the quartet – Martin Beaver and Kikuei Ikeda (violins), Kazuhide Isomura (viola), and Clive Greensmith (cello) – has collaborated with a remarkable array of artists and composers, built a comprehensive catalogue of critically acclaimed recordings, and established a distinguished teaching record. Performing over a hundred concerts worldwide each season, the Tokyo String Quartet has a devoted international following that includes the major capitals of the world and extends to all corners of the globe. Officially formed in 1969 at the Juilliard School of Music, the quartet traces its origins to the Toho School of Music in Tokyo. Soon after its formation, the quartet won First Prize at the Coleman Competition, the Munich Competition, and the Young Concert Artists International Auditions. An exclusive contract with Deutsche Grammophon firmly established it as one of the world's leading quartets, and it has since released more than forty landmark recordings. The ensemble now records on the Harmonia Mundi label.
» tokyoquartet.com