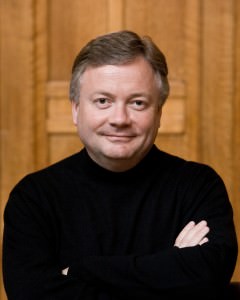 David Hill has been appointed Professor (Adj.) of Choral Conducting in the Yale Institute of Sacred Music and Yale School of Music and as Principal Conductor of the Yale Schola Cantorum. Martin Jean, the director of the ISM, made the announcement earlier this week. The three-year term of the joint appointment begins July 1, 2013.

At Yale, Hill will serve as principal conductor of Yale Schola Cantorum, as well as participate in the training of choral conducting majors with Profs. Marguerite L. Brooks and Jeffrey Douma, and with Masaaki Suzuki, who will remain affiliated with Schola Cantorum as Principal Guest Conductor.

Yale Schola Cantorum, founded in 2003 by Simon Carrington, is a 24-voice chamber choir that sings in concerts and choral services. Supported by the Yale Institute of Sacred Music with the School of Music, and open by audition to all Yale students, it specializes in music from before 1750 and the last hundred years.

Mr. Hill has a long and distinguished career as one of the leading conductors in Europe. His talent has been recognized by appointments as chief conductor of The BBC Singers, musical director of the Bach Choir , chief conductor of the Southern Sinfonia, music director of Leeds Philharmonic Society and associate guest conductor of the Bournemouth Symphony Orchestra. In 2002, he was awarded an honorary doctorate by the University of Southampton in recognition of his services to music. In 2007 he was named an honorary member of the Royal School of Church Music and in 2010 an honorary fellow of the Royal Academy of Music.

Guest conducting credits include some of the leading musical ensembles of Europe: the London Philharmonic, the English Chamber Orchestra, the Royal Philharmonic Orchestra, the Netherlands Radio Choir, and the RIAS Kammerchor, Berlin. David Hill also maintains an active career as organist and pianist in recitals worldwide.

With over seventy recordings to his credit, Hill has performed virtually every style and period in the choral repertoire from Gregorian chant to Renaissance polyphony, from baroque oratorios to modern masterpieces for chorus and orchestra. He has commissioned dozens of works from leading composers of today, including Judith Bingham, Francis Pott, Patrick Gowers, Sir John Taverner, and Philip Wilby.

Of his performance of St. Matthew Passion in Royal Festival Hall (2010),The Telegraph stated, “Could anyone have achieved such a fusion of English choral tradition and state-of-the-art baroque performance practice? I don’t think so. What an extraordinary contribution to our nation’s musical life David Hill has made.” Of his concert at the Cheltenham Music Festival (2012), TheGuardian reported that, “The BBC Singers gave no fewer than four premieres, each in their way extraordinary, in a towering performance directed by David Hill, at Cheltenham College Chapel.” Of the same performance, Richard Morrison (The London Times) remarked, “The BBC Singers were the performers under David Hill’s assured direction. No other choir in Britain (and few anywhere else) could prepare these challenging multi-polyphonic pieces to such a high level.”

David Hill will be on campus for several extended residencies each semester, leading the Schola Cantorum in numerous major projects. He will also participate in the training of the choral conducting majors with Profs. Marguerite Brooks and Jeffrey Douma as well as Maestro Masaaki Suzuki and will take an active role in the artistic and intellectual lives of the Institute, the School of Music and Yale University in general.

Hill looks forward to taking an active role in the artistic and intellectual lives of the ISM, the School of Music, and Yale University. He says, “I am delighted and privileged to be joining the many talented people involved at Yale, in particular to be associated with Masaaki Suzuki and Profs. Brooks and Douma, who do such wonderful work with the students. My wish is to continue developing the styles and repertoire of the group alongside Maestro Suzuki and fellow conductors from around the world.”